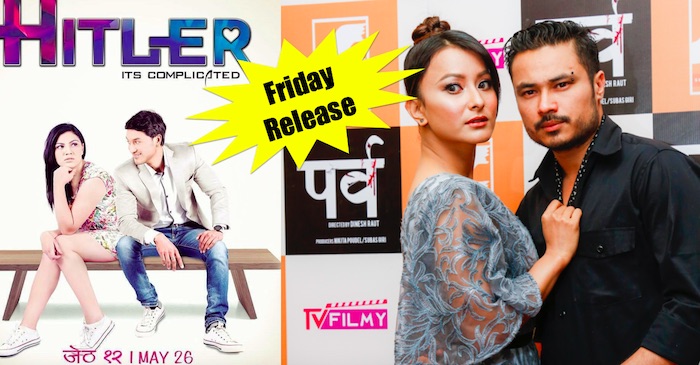 Parva features Koshish Chhetri and Namrata Shrestha in leading role. The movie is the debut movie of another actress Jebika Karki. In the item song ‘Kale Dai ..’ Mala Limbu and Nischal Basnet are featured. The movie is produced jointly by TV Filmy and Subash Entertainment – produced by Subash Giri and Nikita Poudel. The movie is made on a story about an incident that occurred in a festival (Parva).

Watch the trailer of ‘Parva’

Another release of this Friday, ‘Hitler’ is directed by Saurav Dhakal. The movie features Sohit Manandhar and Samiya Bartaula in leading role. Samiya Bartaula is debuting as an actress in the movie. A Gurung and Menuka Pradhan are other well known actors in the movie. The movie is produced by Asta Narayan Pictures is made on comedy and love story. The trailer and the song of the movie have received less numbers of the viewers when compared to that of ‘Parva’. It is to be noted that the videos of both the movies were released in relatively unknown channels.