The Gayatri Mantra is a highly revered mantra in Hinduism. Written in Sanskrit, the mantra reads:

It is pronounced as follows:

Meaning: (Although, many say that translation cannot possibly do justice to the original it implores)
Let us meditate upon the glory of Ishwar,
Who has created this Universe,
Who is fit to be worshipped,
Who is the remover of all sins and ignorance.
May He enlighten our intellect. 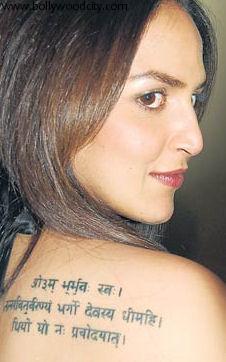 Indian actress is Esha Deol photographed herself with a big tattoo of Gayatri Mantra on her back (see photo on the right). Esha says that she knows the mantra by heart and has been reciting it for many years.

The mantra, if chanted properly, has positive effects on different body parts. 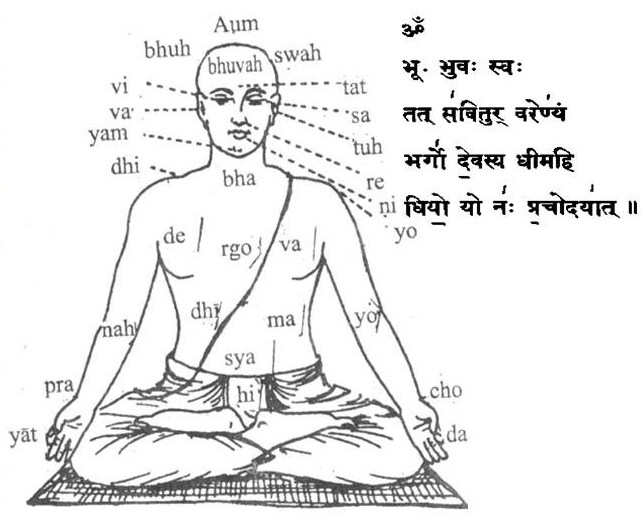 The Gayatri Mantra is the essence of the three Vedas. It is the Vedas simplified. The more one contemplates and meditates upon the Gayatri, the more complexities are revealed to one.

BHUR-Protector of the earth, the material sheath, The Life breath of the Universe. From the feet to the navel center.

BHUVAH-One of the meanings is the sky. The Lord who pervades and eliminates all miseries.From the navel to the throat center.

SVAHAH-One of the meanings is the heavens. He is all Bliss and blesses His devotees with happiness. From above the throat center to the thousand petaled lotus.

SAVITUR-The SUN, Creator, Preserver and Self Luminous, the central mantra of the Solar Science.

VARENYAM-Most fit to be worshipped. Most choice worthy.

BHARGO-The burning splendor of the Sun that dispels ignorance, and therefore sorrows and miseries.

DEVASYA-The â€˜Deva’, The God, He who is All Bliss, The Joyful One, The Shining One, The Revealer of All Glory

DHEEMAHI– We meditate upon Him

Origin and History of Gyatri Mantra

The Gayatri Mantra is attributed to the rishi Viswamitra, from verse of the Rigveda, with Gayatri referring to the Vedic poetic meter of 24 syllables. It is addressed to God as the divine life-giver, symbolized by Savitr (the sun) and is most often recited at sunrise and sunset. While typically associated with outward ritual offerings, it can be recited more inwardly and without rites. Several Hindu scriptures offer praise for the Gayatri Mantra. Manusmriti states that â€œthere is nothing more exalted than the Gayatriâ€. The Atharvaveda calls it the â€œMother of the Vedasâ€. In the Bhagavad Gita, Krishna says, â€œOf all poetry, I am the Gayatriâ€.

The mantra plays an important part in the traditional upanayanam (sacred thread) ceremony for young Brahmin males. It marks the beginning of study of the Vedas, and it is used for directing one’s thoughts toward attaining wisdom. Part of the daily ritual in traditional Brahmin practice is to recite the Gayatri Mantra at sunrise every morning.

Apart from the Gayatri Mantra on her back, bollywood actress Esha Deol has another tattoo, a scorpion on her left bosom. Esha sure has a passion for tattoos on her beautiful body. 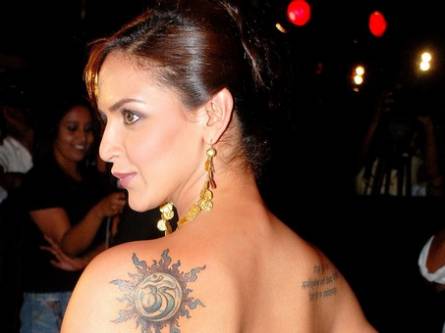 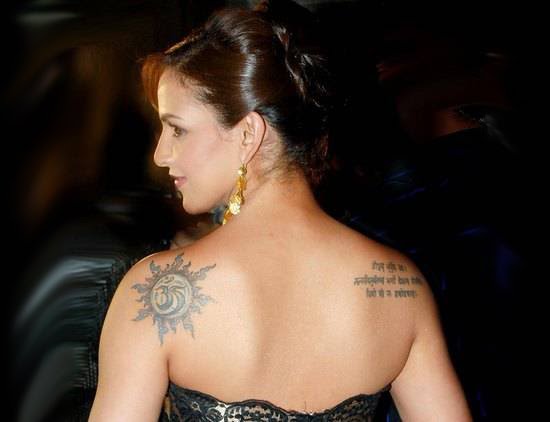