Ex-King, Gyanendra Shah had told in Bhai Tika that the time has come for him to play an active leadership role in the country. He told that the parties and the leaders have failed and he should play the leadership role to lead the country. While the Gyanendra supporters have rejoiced his statement, the political leaders and pundits have ridiculed Gyanendra’s statement as the return of monarchy in Nepali is virtually non-existant.

Talking in a program in Kathmandu the ex-prime minister, KP Sharma Oli challenged the ex-King to participate in the election and take the leadership role. In the program Oli didn’t name Gyanendra but told that, “Everybody who wants to lead the country can participate in the election and get the mandate of the people to lead the country. While KP Oli challenged the ex-king, other ex-prime ministers, Puspa Kamal Dahal ‘Prachanda’ and Jhala Nath Khanal were sitting beside Oli.

I wrote about Gyanendra’s statement in my previous post.

Gyanendra would never participate in the election. That is not only because of the fear of losing, his dignity wouldn’t let him compete with political leaders. On top of the he doesn’t really have a support of the people. The party that supports monarchy is also bitterly divided among the king-supporters and king-non-supporters. The party Rastriya Prajatantra Party failed miserably in the local election.

In the context, the possibility of Gyanendra participating in election is very slim.

The question what Gyanendra might be planning is suspicious. But, logically there is nothing that he can successfully do to re-instate monarchy after more than a decade of removing him from the throne. Gyanendra was forced to quit in 2008 after the parliament voted against monarchy. 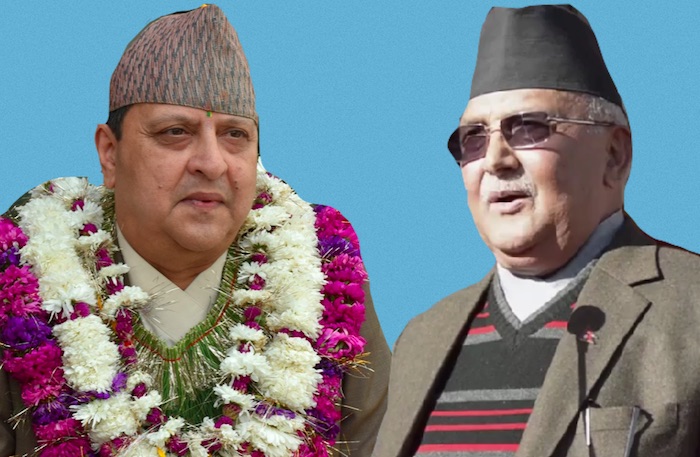