This Saturday, January 15, 2011, is the first day of the Magh month in Bikram Era calendar. The first of Magh is celebrated as Maghe Sankranti. 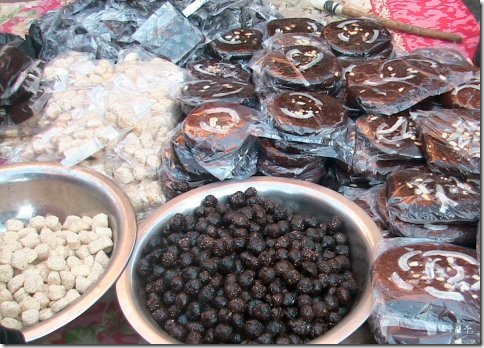 Maghe Sankranti, also called Magh Sakrati or Uttarayana or Makar Sankranti, is observed every year on the first of the month Magh, usually around January 15. The celebration is the end to the ill-omened month Poush in which all religious ceremonies are forbidden.

Even if Magh is considered the coldest day of the year, the celebration marks the welcoming of warmer and better days for health and fortune. The festival is popular in Nepal and in Nepali communities in India (specially in Sikkim). It also marks th
e time when the days start to become longer than the nights.

Despite of the cold, people perform holy dips in rivers all over Nepal. The special delicacy of the festival are yam, chaku (sweet prepared from boiled and hardened molasses), chaku-sesame candy, and ghee.

Nepali communities all over the world celebrate Maghe Sankranti. Attached below is the video of the celebration of the festival in Hong Kong.

The folk belief behind the celebration of the festival goes like:

Once a merchant from Bhadgoan (Bhaktapur) noticed that the supply of his sesame seeds didn’t diminish in spite of a very good retail business. When he looked in the sesame seed container he found an idol of Lrod Vishnu hidden deep beneath the seeds.

It is believed that the the Til Madhav idol was erected and worshipped from that day. (We are not sure why Mahadev idol was made when Vishnu was found. The worship is believed to provide generous supply of food and wealth to the community.

This day is also believed to be the day Vishmapitamaha, the elderly grandfather of the Pandava and Kaurava families, during the MahaBharat period. The tow families are famous for the battle of Mahabharat that took place in the ancient India. Vishmapitamaha was lying on the bed of arrows and was determined not to die until he wanted to.
In that bed, he got the words of wisdom on life and death and then he succumbed to death. Hence, belief goes – those who die on this day go to heaven and will be released from the burden of rebirth. 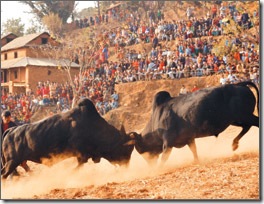 Various communities all over Nepal celebrate Maghe Sankranti in different ways. Although the delicacy and Mela in river confluences are common people in differnt parts celebrate by organizing special sports, events during the festival.

In one such event held in Taruka of Nuwakot district, people witness bull fights. A huge cro
wd gather to witness the bull fight in the area. (Bullfight photo credits: Rammani Adhikari).