According to previous announcement, the Miss Tamang 2010 beauty contest was supposed to be held on May 1 by Everest Fashion Home. When Tamang Kala Sanskriti Kendra wanted to do a separate contest, the organizations began to seek a common ground so that confusion is not created by conducting similar contests. 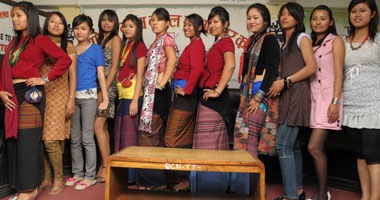 As if we don’t have enough Miss Whatever contests … it is funny how they were going organize two Miss Tamang beauty contests one on May 1 by Everest and another on first week of July by Tamang Kendra. Everest home had already selected 17 contestants (in photo above) for the event and they were already given a month-long training. Now, the combined contest will include the 17 contestants plus the contestants selected by Tamang Kendra. The organizers say that there might be about 34 contestants in the contest.

It is to be noted that there was another Miss Tamang already held in December named, Miss Teen Tamang.

Be prepared for Miss Tamang Kid, Miss Tamang Youth, Mrs Tamang Wife, Ms Tamang Old … in near future. I think it is much easier in Rai community – they can have Miss Thulung Rai and Miss Kulung Rai, in addition to Miss Teen for both the community. In near future we will surely get the Guinness Record of a country with maximum number of beauty contests within a small community! Sounds nice, isn’t it?

One thought on “Miss Tamang 2010 rescheduled for July 1”