**You may also want to read the Pre-release review of ‘Chadke’.**

After a very good publicity a equally good response from the promotional matters, ‘Chadke’ was released all over Nepal on 22th February. ‘Chadke’, said to be an environmental thriller movie, is based on youths and the environment of Chitwan area. The movie is the debut movie of director Nigam Shrestha, and he had also assisted ‘Loot‘ as an assistant director. ‘Chadke’ features Namrata Shrestha, Robin Tamang, Arpan Thapa, Dayahang Rai, and Sushil Pokharel in leading roles. 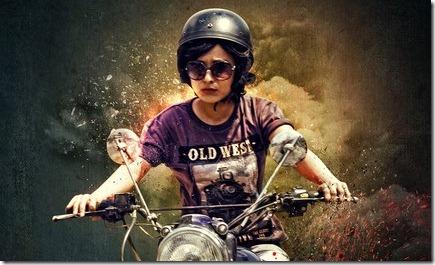 Chitwan is ruled by a multi-ethnic six-member gang named Royal gang. The leader of Royal gang, Chewang Lama, haa political backing and his gang smuggles and sells Chitwan National Park animals to foreigners. The opposing political party supports a small gang of Bindu and offers Rs. 50 lakhs bounty to kill Chewang Lama. In the meantime, Royal gang’s member obstruct the work of a researcher who had come to study about plants and species in the National Park. The movie is all about these the researcher, Bindu, Chewang, and their gangs. I don’t want to kill the excitement of watching the movie by revealing the plot.

One of the strongest point of ‘Chadke’ is the star cast and their performances. Another good thing about the movie is its music and background music. The music directors are very appreciated for using Nepali traditional instruments in background music, and making sound it great. The songs of ‘Chadke’ are also melodious and nice.  Another good point is the cinematography of Sanjay Lama and Hari Bahadur Ghale(Lama). Both Chitwan and the National Park are very beautifully portrayed. The scenes in the movie might even be of help in the tourism of Chitwan because of the cinematography. The editing of the movie is also good.

In a recent interview, Nigam Shrestha has said that movie is about content, performance and music. He is true in case of the performance and music but the content has failed to live up to the expectation. The weak point of ‘Chadke’ is the story. After watching the movie, many might wonder what the movie was all about!

The director has tried to include many aspects of Chitwan and Nepali society – in a bit crowded fashion. It involves a lot of things like gangsters, politics, smuggling of animals and trees, youth unemployment and they are presented in confusing manner.  The first half movie gives an impression that the movie is all about gangsters but, the second half doesn’t live up to the expectation when the viewers realize that it was something else the movie was about. The dialogues are well written and suit the characters but, the story and screenplay are the weaknesses.

Some of the unanswered questions a viewer might have after watching the movie are:

‘Chadke’ features the most talented actors in Nepali movie industry and their performance is very good. The characters of different caste and culture is another important aspect of the movie and each of the actors have done justification to their role.  Arpan Thapa represents Tharu community, Dayahang Rai represents Rai community, Namrata Shrestha represents Newar community, and another gang member represents Muslim community.

Story is the key in the success of a movie, and ‘Chadke’ is weak in that aspect. But, we shouldn’t overlook all the other great things in the movie. Chadke is made to give the very good message to the audience that forest and animals should be saved. It has a lot of violence and killing of people. Weak hearts? ‘Chadke’ is not for you!

For the first time in the history of Nepali movies, ‘Chadke’ was successful in replacing Hindi movies in theaters because of high demand. This is a good sign, and indication that good movies have potential in Nepal.

The story and execution disappoints audiences (a Nepali article on initial responses of ‘Chadke’) so, you should make your own decision whether you want to watch the movie or not. You might enjoy the movie, if you don’t expect too much!