The movie ‘Miss Nepal’ was released on May 30, 2014 in theaters out of Kathmandu and it was released in Kathmandu on June 6, 2014. The organizer of the beauty pageant, Miss Nepal, Hidden Treasure had lodged a complaint with the police to stop the release of the movie. After reviewing the claim, the police had decided that Hidden Treasure’s claim was baseless and allowed the movie to release. In a controversial poster of the movie, the actress and producer Suvekshya Thapa had posed topless with only a fish covering the upper part of her body. The poster later proved to be an exact copy of a Bollywood movie (read more about the poster controversy).

The movie presented by Suvekshya Thapa is a presentation of Suvechchha Entertainment. The script is written by Nawal Nepal, music by Bibas Chaudahary, choreography by Divya Subedi, and camera by Saimon Rajbanshi.

Actress Suvekshya Thapa has been trying desperately to create a controversy out of her upcoming movie ‘Miss Nepal’ and the recent topless photo is told to be only a part of it. In response to the vulgar nature of the photo, Suvekshya had told that the photo was taken according to the storyline of the movie. But, the photo style is far from being original. The following photo of Bollywood actress Sherlyn Chopra shows where the Miss Nepal producer got the idea. 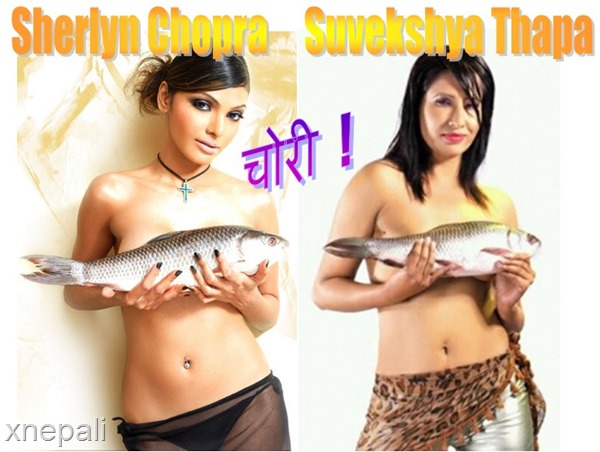 The censor board of Nepal has always objected such type of posters. In case of ‘Chapali Height‘ the film makers were forced to paint the posters to make it look like clothes. With this fact, it is clear that Suvekshya is doing these propaganda only for the promotion of the movie.

‘Miss Nepal’ is Suvekshya’s home production and she is featured as one of the contest winners. It is to be noted that Suvekshya’s daughter is old enough to be eligible to participate in the contest – only open to unmarried girls.

Here are some examples of what she has been doing for the promotion. 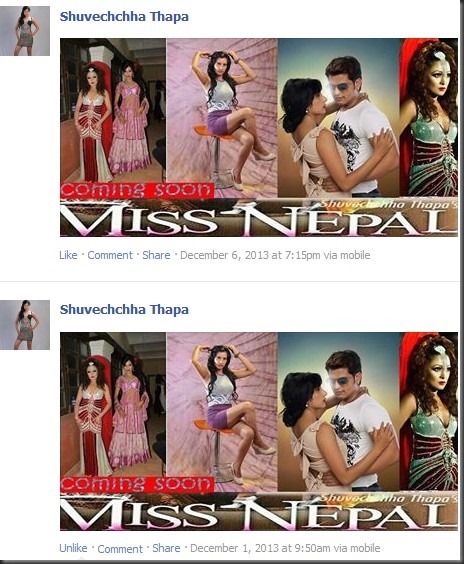 On the direction of Ramesh Kharel some three dozen police officer went to Jaya Nepal cinema theater to watch the movie. The officers found nothing objectionable in the movie and they have asked Suvekshya to go ahead with the release of the movie.

‘Miss Nepal’ is scheduled to release in theater on April 18. The producer Suvekshya Thapa is in the leading role in the movie. She had tried to create controversy by copying Indian Playboy girl (see above) Sherlyn Chopra.