The Rajesh Payal Rai restaurant, Darsan Namaste, started in February has been destroyed by the Earthquake of April 25. To inagurate the resturant Rajesh had invited the only actress Keki Adhikari, creating a speculation of possible affair between Rajesh and Keki. They however refused such rumor. 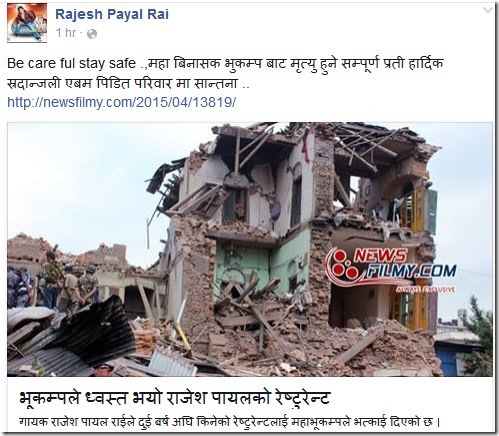 Rajesh had invested about Rs. 5 million to set up the restaurant located in Kamalpokhari. With the restaurant Rajesh’s motorcycle and other belongings had also been destroyed. During the damage to the building the father of one of the waiters had also died.

Rajesh Payal is currently safe in East Nepal. He was traveling in the area for a program. Responding to the loss Rajesh told, ‘I am saddened by the loss of the investment."