I wrote about the blunder Niti Shah made and how it is creating a backlash in my previous post. Miss Nepal 2017, Nikita Chandak, has written a post in support of Niti and asked everybody not to go after her because, she thinks, Niti did mistake like every human does. Here is the full status of Nikita:

Last time I had posted on wishing Niti luck for her coronation night.
The morning of November 14th when I woke up, I found so much of hate comments for her that she doesn’t deserve and so did I delete the post.

She is a human being like all of us. Mistakes happen and sometimes the days just aren’t in your favor. Sometimes you just can’t express your thoughts in a way that everyone else is looking for.

Watch the video of what Niti told:

The damage done is already done and it can’t be undone. Niti has also realized her mistake and has told that it was an informal communication between the contestants. If I were her – I wouldn’t try to save my ass and simply say sorry and wait a while before explaining (read CONFUSING).

To summarize, Niti says, “… The statements I made at Showa University (which was purely a discussion and not a speech) were misunderstood. I was speaking about some gender realities of Nepal that I have personally encountered but even though I didn’t mean wrong, I was misunderstood.”

The following statement in itself is contradictory like – she says, “These don not represent all the realities of Nepal. But they do represent a known reality of Nepal. It was not my intention to suggest anything beyond that.” 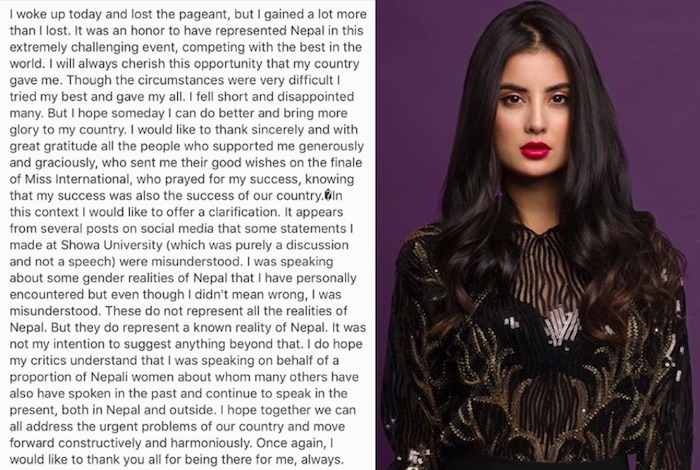 Similarly, former Miss Nepal, Malina Joshi has also spoken about the case. I love the way she has dealt with it. Instead of telling if Niti was right or wrong, she wrote, “.. After spending so much of time and creativity on bashing, criticizing, judging, trolling and laughing at Niti Shah, who was there representing our nation in Japan for Miss International, can we now focus on Nitika Chandak and vote for her?” 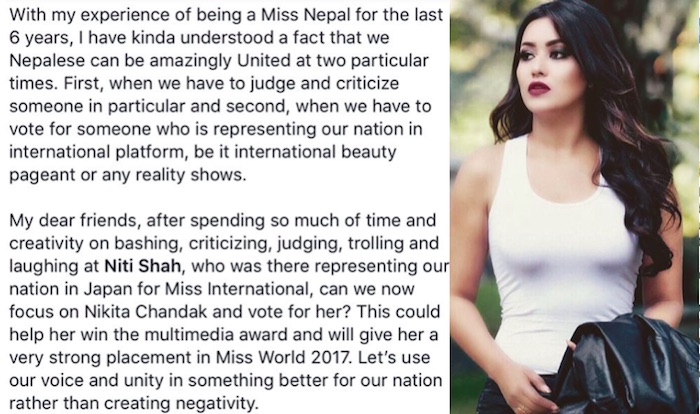 UPDATE: Miss Nepal 2016, Asmi Shrestha also wrote a supporting statement to Niti Shah. She remembered the case of Bollywood actress Alia Bhatt and her failure to answer simple questions in a talk show. Here is the full text of her statement:

Dear Niti,
Amazing job you have done in Miss International 2017. I am very proud of you the way you have represented. I see many videos and comments making rounds in social media about the statement you had made. How you have to take this is there are always the good and bad side of everything. Likewise, the fame does the same to you. By now, I’m sure you have realized. But don’t let this take you down. Use this experience to make yourself stronger not just emotionally but also, take this as a chance to make yourself be better than what you are today.
Your case reminded me of what happened to Alia Bhatt. I’m taking the Bollywood reference because this happened to her as well. The most loved girl suddenly becomes a topic of jokes and trolls to everyone. When she was invited to a very famous talk show and then she couldn’t answer a very simple question, she got bashed by most of the netizens and that happened in a much larger scale.
So what you need to think and take from this situation is look how she handled the situation and now has grown to be the finest actress winning the national awards back to back.
Main thing is she accepted, she learned, she moved on and came back stronger. Sometimes, it’s just a bad day and things go wrong. You already must be so exhausted because of the energy you have put on for the international pageant. I can imagine it. So, take some time out for yourself. Come back stronger! And meanwhile, we will always be there.

***
Yes, we should get over Niti now and focus on the things that matter (after, of course, you write your comment in the comment box below ;)