CPN UML leader KP Oli told that the honorary PhD he received from a so-called-university is not fake and he is not willing to give it up.

After the news about the university being fake, most of the receivers of the honorary PhDs degree – Madan Krishna, Hari Bamsha and Kantipur’s Rameshowr Thapa have already given-up the degree with the exception for the two political leaders – KP Oli and Bijaya Kumar Gachhedar. 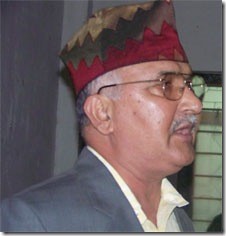