Anmol KC made news when he appeared with two bodyguards when he visited film-halls during the release of his movie ‘Dreams’. It is not clear if the extra security was necessary or was only a publicity stunt. One thing is for sure, other actors are also following Anmol KC for the sake of publicity. 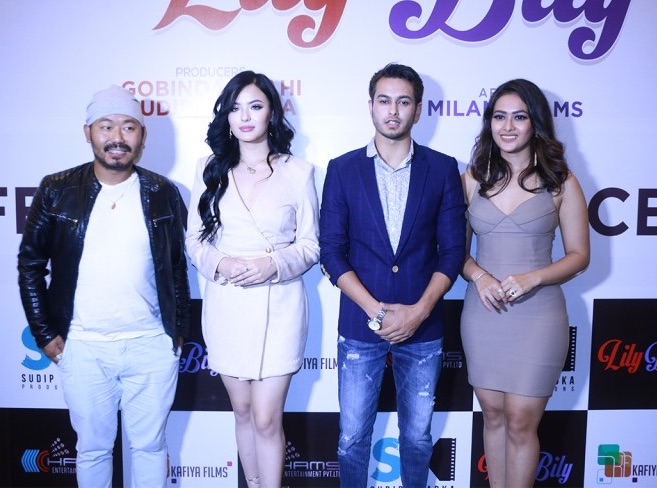 Being covered by bodyguards in film halls makes sense. It is not easy for the artists to deal with the crowd. That was seen during the release of ‘A Mero Hajur 2’. The six bodyguards had hard time protecting the actors Salinman Baniya, Samragyee RL Shah and Salon Basnet.

On Tuesday, Sept 12, The film journalists were surprised when actor Pradeep Khadka and actresses Jasita Gurung and Rebika Gurung appeared with bodyguards each. The event was the announcement of upcoming movie ‘Lily Bily’. The actresses were given two bodyguards each and the actor had 4 of them. As there were only journalists at the event held at a five star hotel, Annapurna, the artists had a least amount of security threat. It was clearly a show-off – an uneasy show-off.

The actor Pradeep Khadka has been quite popular after the success of ‘Prem Geet’ and ‘Prem Geet 2’. But, that doesn’t qualify him to have his own bodyguard. It is to be seen if he will continue to appear with bodyguards in public functions.

Please comment on the show off and the requirements of a bodyguard for an artist.