The royal crown of ex-king Gyanendra and his predecessors, was recently made public after a decade of keeping in hiding after abolishing monarchy from Nepal. 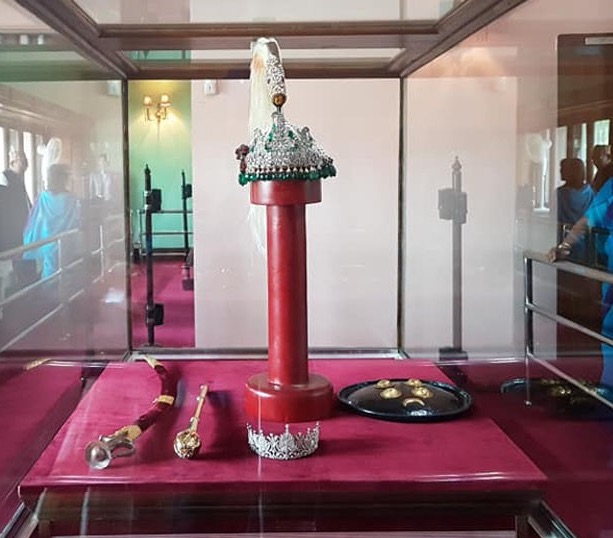 The priceless jewel was unveiled by the Prime Minister KP Sharma Oli in a special ceremony held at at Narayanhiti museum – the royal palace of the past. After monarchy was abolished in 2008, the Palace was converted into a museum. Right after then-king Gyanendra vacated the palace on June 11, 2008, the prime minister at that time, Girija Prasad Koirala had declared that the palace will be converted into a museum.

On October 15, 2018, the Ministry of Culture, Tourism and Civil Aviation organized a special program to display the crown, sceptre and the sword used by the former kings. Because of Dashain holidays, the palace museum will open on October 22.

The museum opened for public on February 27, 2009 during the prime-ministership of Puspa Kamal Dahal ‘Prachanda’.

According to reports, a special security arrangement has been made for the exhibition of the royal crown for the public. The crown is kept under seven layers of protection and in a bullet-proof box. The crown is continuously being monitored by CCTV camera. In addition, a touch on the box can also activate and alarm. In addition to the security arrangement, guards of the museum will also be continuously monitoring the crown.

The royal crown is priceless and irreplaceable. That is because the feather used in the crown is that of Humayu bird (the bird of paradise). The bird is in the verge of extension. So getting the feather of the bird is next to impossible.

In addition to the priceless feather, the crown is full of diamond, gold and silver. The monetary value of the crown couldn’t be determined by the government probe committee.

According to a report, the crown has 2,700 pieces of diamonds. The crown has a lot of precious ruby. Gold and silver is used to construct the crown.

Right after the government took the ownership of the crown from the king, the government sought the help of jewelers to determine the price. They have told that the crown can not be tagged with a price and it is a priceless artifact.

Reports say that the crown consists of around 2,700 pieces of diamonds and there are precious ruby on the crown.