Actress and model Reema Bishowkarma and her newly wed husband Robert Bishwokarma have donated the fund they had set aside for the honeymoon trip to the Film Artists Welfare Fund of Film Development Board (FDB). Reema and Robert handed over the fund to actress Jharana Thapa, the coordinator of the Film Welfare Fund, in an event in Kathmandu. 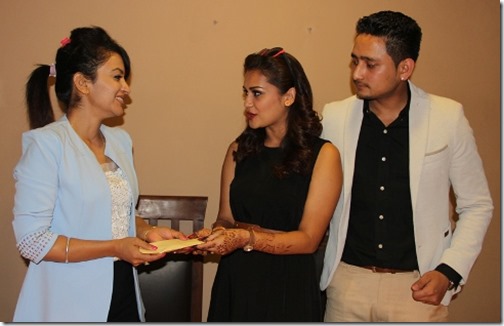 Reema and Robert were planning to go to Maldives or Paris for honeymoon. As the honeymoon plan was canceled for now, they decided to donate the amount for good cause. Jharana was recently appointed to coordinate the social wing of FDB. In the fund handing over ceremony, Reema’s husband Robert was also with her.

Reema had married the UK NRN on Sunday, September 27. In the fund handing ceremony, Reema told that she will keep on working in the film industry after marriage. She told Jharana Thapa is a good example of how actresses can keep on work in films after marriage. Reema’s honeymoon dream is to go to Paris and visit the museum that has the Leonardo Da Vinci’s famous art, Mona Lisa. Robert has dreams to go to Maldives.

In the event held on Friday, Reema seem confident that she will be working the film industry and there were indication that she might also produce movies in near future. Reema is resuming her work on Saturday, October 3 and Robert is returning back to the UK on Sunday. Reema debuted in Nepali film industry in ‘Swor’ and her recent movie ‘Bhale Fight’ is currently running in theaters.

Talking in the event, Reema told that she is enjoying the new married life, introducing herself to the new family members. She told, “The connection and attachment after marriage is so sweet. In addition to that, you get attached to the new family members without any judgment.” Reema and Robert also told about their meeting in Facebook, how Robert sent the friend request and the process Reema followed before she accepted the request.

The Film Artists Welfare Fund currently has Rs. 30,400,000 in it’s reserve. The fund is used for the film artists in urgent need. After being appointed the coordinator, Jharana Thapa has a target to increase the fund to Rs. 50 million in her tenure. The amount of Reema and Robert couple donation wasn’t revealed in the event. 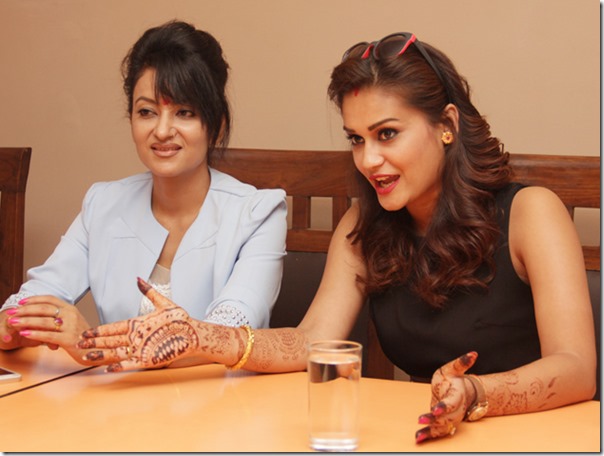