On her 30th birthday Rekha Thapa didn’t organized a celebration party but, called a small informal meeting with journalist in Indreni Foodland, Maharajgunj. In the meeting, she presented three of the five children she had been supporting for the last two years. 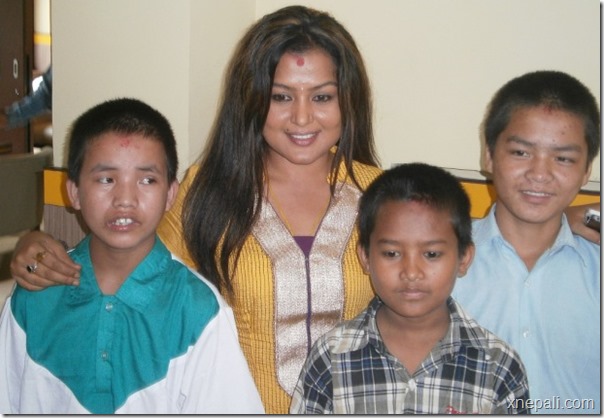 Rekha told that she had started supporting five violence affected children for the on her birthday two years ago. She told that she had been supporting the children by providing all their requirements including place to live, food, education and health. Rekha told, "I have earned the name and fame from movies. Now, I want to support the society by doing social works."

On the occasion, Rekha also told that she had registered a NGO named Thought For Change Nepal and has been serving as a president of the organization for the last two years. The organization is working with Kamana Higher Secondary School in Gongabu to offer free education to violence affected children.

Rekha told that she doesn’t like cutting cakes in her birthday so, she had no plans for such celebration. She also asked journalists to forget the past and help her in her social activities. Rekha has recently started a formal political career by getting the membership of CPN Maoist. She is also expected to participate in the election as a representative of the party. Journalists have linked the meeting to her political interest.

Whatever may be the motive, social work and supporting children is a right path to choose on one’s birthday. Happy belated birthday to Rekha Thapa from xnepali team!