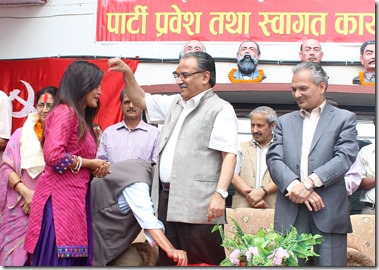 In the program Rekha told that she comes from a political family and she has chosen the party as it is the only party advocating the poor.

Rekha has been close to the party since she danced with the Maoist leader Prachanda a few years ago. Rekha had also tried her best to get a political appointment to head the Film Development Board. Although the effort wasn’t successful, she has used for the entry in politics.

The previous video of Rekha and Pranchanda dancing while Rekha sings: