Bikini Killer Charles Shobhraj‘s 22-year-old wife Nihita Biswas is told to be featured in a reality TV show, Bigg Boss 5. From the time Nihita announced her love for the convicted killer, she was expected to cash in the popularity she got from linking herself to the controversial character. 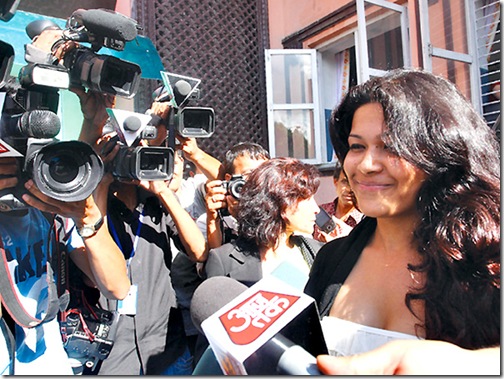 An Indian Newspaper, Times of India, has told that Nihita has already confirmed her presence in the show. Bigg Boss show, known for presenting controversial content, goes on air in October. Nihita is expected to arrive in India by the end of September for the preparation of the show.

On July 30, 2010 the Supreme Court of Nepal had convicted Charles Shobraj and ordered a life imprisonment sentence for killing a Canadian tourist in Kathmandu in 1975.

The show depicts the lives of a handful of celebrities put together under one roof. Their stay at the house is captured on camera. Nihita, who is the wife of one of the most dreaded serial killers in the world will obviously add to the show’s attraction. The channel got in touch with her last week and she has signed on for the show.

When Shobraj was arrested in Kathmandu in 2004, Nihita met him as his interpreter and fell in love with him. They got married in October of 2008 on the occasion of Dashain, in the jail  without informing the jail authorities.