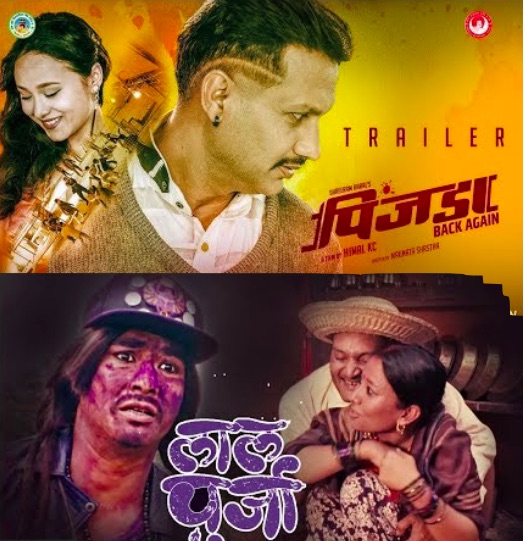 Nikhil Upreti debuted as an actor in ‘Pinjada’. A sequel of the super hit movie, ‘Pinjada Back Again’ was released this week featuring new cast and crews except for Nikhil. In the original movie, Nikhil had jumped from the top of 7th floor of Kantipur publication building. The stunt had created a huge media coverage and had also established him as an action star of Nepali film industry.
END_OF_DOCUMENT_TOKEN_TO_BE_REPLACED

The action star of Nepali film industry, Nikhil Upreti has been quite busy after his comeback in the Nepali film industry in ‘Bhairav’. The upcoming release movie ‘Pinjada Back Again’ is the sequel of the super hit movie of Nikhil ‘Pinjada’. In a program held in Kathmandu on October 12, a song of the movie was released. The song titled ‘Yeta Pani Chaina Uta Pani Chhaina’. The song composed in folk tune features Nikhil and Sara. Nikhil and Sara were choreographed by Ramji Lamichhane. In the program, Nikhil told that he had pretty tough time to dance to the tune.

Nikhil and Sara were featured together in an earlier release ‘Rudara’. With Sara and Nikhil, the movie also features Sushmita KC, Pukar Bhattarai, Jack Shrestha. The cinematographer of the movie is Saurav Lama and the movie is directed by Himal KC and the story is written by Maunata Shrestha.
END_OF_DOCUMENT_TOKEN_TO_BE_REPLACED