The action star of Nepali film industry, Nikhil Upreti has been quite busy after his comeback in the Nepali film industry in ‘Bhairav’. The upcoming release movie ‘Pinjada Back Again’ is the sequel of the super hit movie of Nikhil ‘Pinjada’. In a program held in Kathmandu on October 12, a song of the movie was released. The song titled ‘Yeta Pani Chaina Uta Pani Chhaina’. The song composed in folk tune features Nikhil and Sara. Nikhil and Sara were choreographed by Ramji Lamichhane. In the program, Nikhil told that he had pretty tough time to dance to the tune.

Nikhil and Sara were featured together in an earlier release ‘Rudara’. With Sara and Nikhil, the movie also features Sushmita KC, Pukar Bhattarai, Jack Shrestha. The cinematographer of the movie is Saurav Lama and the movie is directed by Himal KC and the story is written by Maunata Shrestha.

Talking in the program the director Himal KC told that movie is not a sequel of the previous movie ‘Pinjada’. He told, “There is no connection with the previous movie. We have experimented by using some new types of actions in the movie.” The director is known as an action director of the film industry.

The movie is scheduled to release on Magh 4. 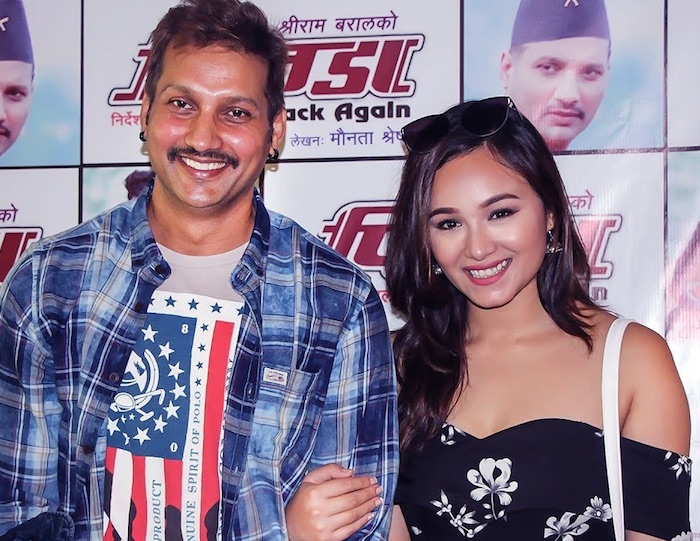 These days producers are producing movies with names similar to hit movies but stories totally unrelated. Almost all the sequels these days are told to be not-linked-to the original.

For example ‘Pinjada Back Again’ has no links to the original hit movie ‘Pinjada’ except Nikhil Upreiti.

‘Darpan Chhaya 2’ had no links to the original movie, so did ‘Prem Geet 2’ and so on…

How long is this trend is going to last? Isn’t it a crystal clear that they are cheating on the viewers. The viewers are not fools so they had rejected most of such movie – the movies that had no links to the original movie.