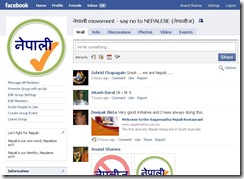 I was thinking of myself â€“ being called â€˜Nepalese‘. It sure wasn’t the first time I was called Nepalese, but every time I am called by that adjective I feel a bit odd. The word sounds a bit foreign even if the whole â€˜Nepal’ is attached to it.

Nepali is our identity, Nepalese isn’t!

Nepali is our own word, Nepalese isn’t.

I called myself â€œNepaliâ€ my whole life. We sang songs like â€œYo Nepali sir uchali â€¦â€. There was no â€˜Nepalese’ in my early daysâ€¦ not even a trace of it.

Then came this information age. The global village shrunk in size, people came know what Gadhimai mela exactly is, Ram Bahadur Bomjom made international headline, Khagendra Thapa Magar is featured in US magazine, and these are only a few to name. The foreign media (and sometime our own media) portrayed us as Nepalese instead of Nepali. I believe, we are Nepali and there is no word called â€˜Nepalese’ in our dictionary.