Actress Shrisha Karki committed suicide in August of 2002 after a photo was published in a tabloid, ‘Jana Aastha’. The death of the 24-years old actress shocked the entire film industry. The film artists went to streets with demand to arrest and prosecute the journalist who published the photo in the newspaper. The editor of the weekly, Kishor Shrestha, went into hiding and everybody was looking for him. People vandalized the newspaper office. It was one of the very bad incident in the history of the Nepali film industry. But, nobody was arrested or prosecuted.

It has been 16 years of the incident – in 2018, the journalist, Kishor Shrestha is the acting chief of the official media watchdog of the Nepal Government, Press Council Nepal.

Video report of the incident:

What happened to Shrisha Karki?

There is no independent report about what had happened to the 24-years-old actress before she committed suicide. Two different views were expressed by Karki’s family and by the journalist who published her photo in the newspaper.

According to the Shrisha’s mother, published in BBC, her daughter committed suicide after black mailing by the journalist. Nepali film actor and producer, Ashok Sharma, had told BBC that the incident was a murder. Thousands of film industry personnels and public had joined hand in a public protest against ‘Jana Aastha’ weekly at that time. Some had also vandalized the office of the newspaper. The public demanded the journalist Kishor Shrestha, the editor of the newspaper to be made public. But, he went into hiding for more than six months after the incident. The newspaper however continued to be published regularly.

According to Kishor Shrestha

The journalist wrote and article detailing the incident. In the article he claims that the publication of the photo is not the real cause of the suicide. According to Kishor, the actress Shrisha Karki used to go work as a prostitute. She used to charge Rs. 5,000 to 10,000 per night and another actress Sunita Khadka used to supply different actresses to their clients.

The actress Sunita Khadka’s real name is Shristi Sharma and she had acted in ‘Behuli’ and had also produced a movie named ‘Dharti’. Kishor claims that the actress was working as a mediator of actresses with businessmen, police officers and army officers. At that time, Shrisha had gone with police sub-inspector Kumud and the photo was actually taken by Kumud in his room. Kishor claims that Shrisha’s boyfriend however was an army officer. When the army officer and the police officers had issues about the publication of the photo, she committed suicide. 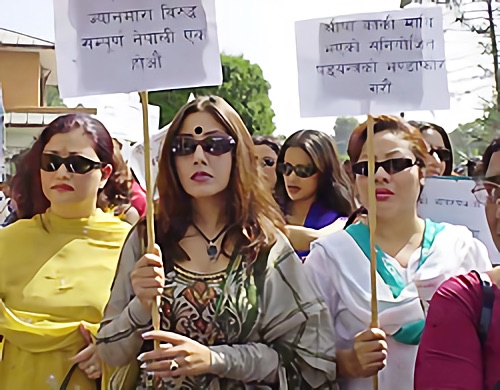 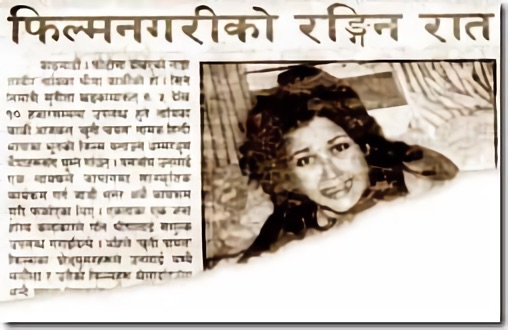 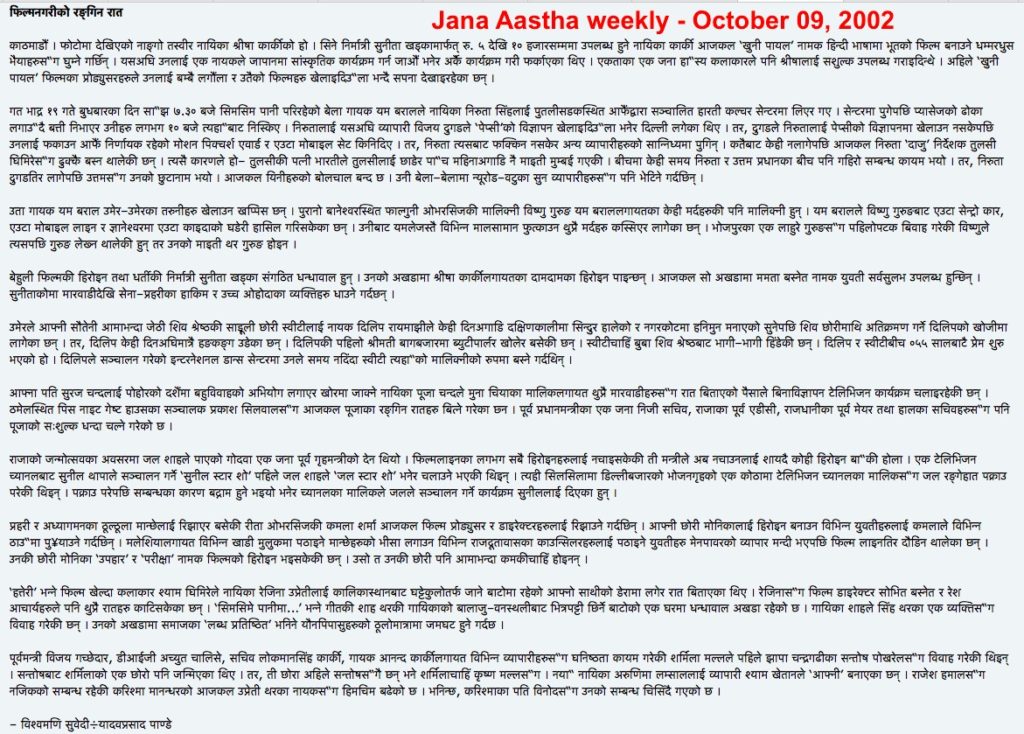 By the way the news article was written, it mostly is a fake news. Except for Shrisha Karki, other actresses mentioned in the article are still alive and their involvements in such acts can not be proved.

According to an article written by Manjushree Thapa in Nepali Times at that time, the photo was reportedly used to blackmail the actress into prostitution. The following text is quoted from 9 October, 2002 edition of the weekly:

According to them, the picture was taken a year and a half ago by a photographer and a policeman who has since retired, Uddav Bhandari, after inviting Karki to an apartment and forcibly stripping her, with the help of a film director; it was their intention to blackmail her into prostitution. The actress filed a complaint immediately after the incident, but the police were slow to act on it. She went to meet the photographer, but could not retrieve the film. According to film artists, Shrestha continued to extort her even after her engagement. He ran the photograph after Karki refused to give in to his extortion.