END_OF_DOCUMENT_TOKEN_TO_BE_REPLACED

There were four new Nepali movies released in theaters in Nepal on July 1, 2016. Out of the four only one was well known movies and others were unheard of. The movie ‘Teen Ghumti’ – based on BP Koirala novels, ‘Anmok Kshan’ a production of Sikkim based Nepali, ‘Lale’ and ‘Surya The Power’. Very few viewers turned in to theatre as the climate in Kathmandu was rainy on Friday. 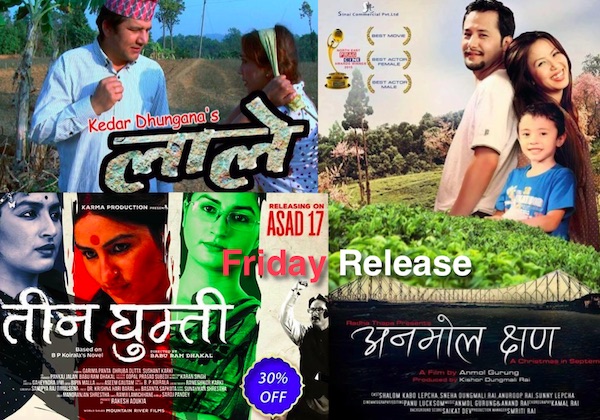 The movie ‘Teen Ghumti’ is a movie made on the story of the novel by BP Koirala. The movie produced by karma Production is presented by Rakesh Adukia. The movie was inagurated by late prime minster Sushil Koirala.

The movie is about the characters of a woman in three different roles – as a wife, as a girlfriend and as a mother. The movie features the ‘Jhola’ actress Garima Pant in leading role. The movie directed by Baburam Dhakal features Dhruba Dutta and Sushant Karki with Garima.
END_OF_DOCUMENT_TOKEN_TO_BE_REPLACED