Shortest artist in Nepal, Dipen Shah, has died on November 16, 2017 at the age of 19. He was admitted to the hospital after he had fever. According to the family sources, both of his kidneys had failed and he had also problem in his heart.

Born in 2055 in Bhimeshwor Municipality in Dolkha, Dipen had acted in a number of television serials. ‘Jhayaikuti Jhayai’ and ‘Chheu Na Tuppo’ were two of his most popular serials. In addition to TV serials, he had also acted Nepali movies. After debuting in ‘Sarathi’ he had also acted in ‘Joker’. 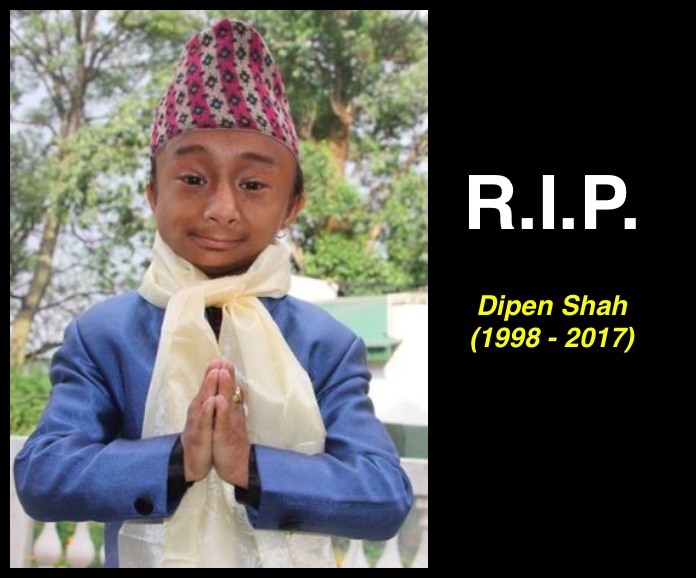 END_OF_DOCUMENT_TOKEN_TO_BE_REPLACED

Miss Nepal International 2017, Niti Shah, made a huge blunder in Japan when she talked about the education of women in Nepal. She showed how unprepared she was in representing the country in an international arena. But, making mistake is human and, it is the way we learn a lot of things. That is what Niti is being told to do.

I am talking about the suggestion of Miss Nepal 2016, Asmi Shrestha. Asmi wrote a long message to Niti Shah and reminded her about Bollywood actress Alia Bhatt. I din’t know much about Alia Bhatt until I shared Asmi’s suggestion to Niti Shah in my previous post – (Suggestions to Niti Shah from ex-Miss Nepal)

Alia Bhatt is the daughter of a well known Bollywood film director, Mahesh Bhatt. Being from an affluent family, Alia had lived a life in luxury and she could afford to be dumb and clueless about the majority of India. That was until she went to a TV interview and she made dumb mistake in 2014.
END_OF_DOCUMENT_TOKEN_TO_BE_REPLACED