Actress Ashika Tamang – the actress of ‘Sushree’, the Nepali actress who lives in Germany, has sent a tearful message. In the message to go vegetarian in Dashain, Tamang has told that they have their families and who should be mindful for the pain we might cause to their families when we eat meat.

Although Ashika Tamang is very serious in her message delivery. She is full of tears and at one point she couldn’t speak because of the pain she is feeling – a lot of viewers of her message took her message with a grain of salt. Some even found it funny.

Watch the following video and decide for yourself:

Let me transcribe her message:
“Namaste. Nepal, it is Dashain time. My best wishes to every Nepali on Dashain and hope they celebrate Dashain in good way.”

Ashika sobs and adds, “Everybody eats meat in Dashain festival. They murder chicken, buffaloes, Khasi to eat meat.” She cries and sobs on telling it and says that she feels heartbroken on seeing people those. She adds, “It is ok to eat meat but, you shouldn’t murder others, you shouldn’t break other’s families.”

A lot of comments were targeted to Ashika’s comment when she mentions chicken, Khasi and Khasini (she might have meant she-goat).

Do animal have feelings? Feeling for their kins?

The word sentient means an “able to perceive or feel things”. Today most of us would probably also say that animals are able to feel emotion, form attachments and have distinct personalities. Yet for many decades the idea of animals feeling emotions or having personalities was dismissed by behavioural scientists. There is a debate on whether animal have the same intensity of feelings that human have.

But, every animals need food to survive. Killing an eating another animal is totally natural. A tiger doesn’t need to think about the feeling of its prey. Human can’t disrupt the food cycle just because another animal has “feeling”.

‘Bali’ system in Durga temple
The bali system in Nepali temple is a very unhygienic way of animal slaughter. The public display of such an act makes other people, specially kids, brutal and less-sympathatic to other. 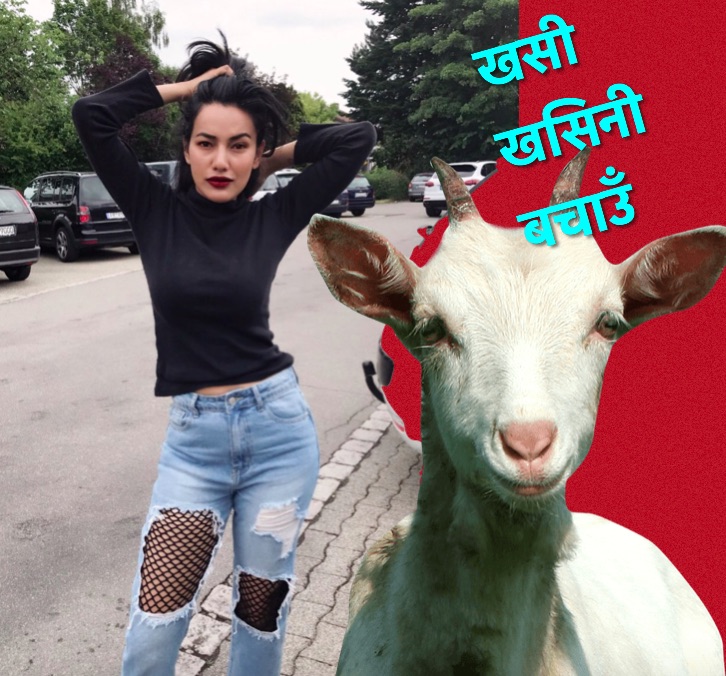