The first look poster of upcoming movie ‘Fateko Jutta’ indicates that the movie is a suspense thriller. The movie dierected by Nikesh Khadka features Saugat Malla, Priyanka Karki, Kameshowr Chaurasiya and Buddhi Tamang in main roles. The dark comedy movie was initially scheduled to release on Bhadra 23 but, the release date was delayed to Kartik 17 (November 3, 2017).

Produced by the ‘Chapali Height’ franchise producer, Arjun Kumar, the movie is made under the banner Arjun Kumar Films in association with Highlights Nepal and Popcorn Pictures.

In the first look poster, a person is shown standing with his hand on the hip. There is no indication on who the person is because the upper portion of the photo is cropped. Wearing torn shoes and a dhoti, there are empty bottles lying around on the floor. There is a jute sack with something inside it. It looks like the person is closely guarding the jute bag. 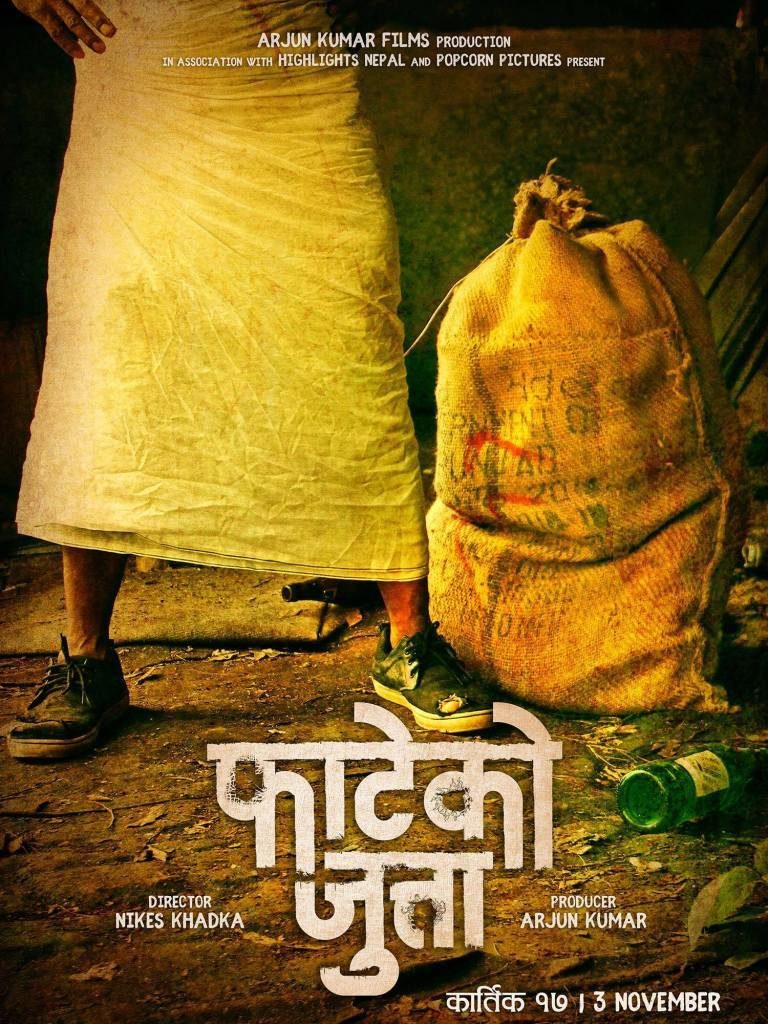 Although the poster has been successful in creating a little bit suspense, the design however can’t be considered attractive. The level of suspense is also very mild as it doesn’t raise the curiosity level about either who the guy might be or, what might be in the jute bag. While looking at the poster, one doesn’t care much about the identity of the person of the the content in the bag because there is no addition information about them.

The shooting of the movie started in May. The lead actors of the movie, Priyanka Karki had worked with Saugat Malla in a number of movies in the past. Some of the movies featuring Saugat and Priyanka are â€˜Shadangâ€™, â€˜Fankoâ€™, and â€˜Shree 5 Ambareâ€™. Although both the actors are considered best in their field, none of the movies were commercially successful in the past.

Because of the popularity of Priyanka and Saugat, the movie is expected to be successful in attracting movie goers. As the comedy themed movies are doing better when compared other movies these days, the film makers are hopeful from the movie. It is to be seen if the suspense in the poster will create the momentum required for the success at the time of release of the movie.