Two new Nepali movies were released in theater on Friday, April 29, 2016. Both Suraj Singh Thakuri starrer ‘Junge’ and Jiwan Luitel starrer ‘Baazigar’ are action movies – one targeted to the multiplex viewers and another to the single theater viewers respectively. 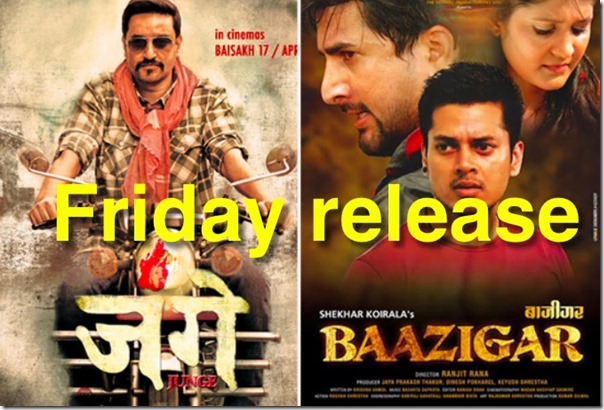 The movie featuring Suraj Singh Thakuri and Richa Sharma in leading role is considered an awaited movie because of the trailer, star cast and film making style. Other notable actors in the move are Anup Baral and Dipasikha Shahi. The content and style scene in the trailer had been appreciated. Actress Richa is featured as a hot queen – in negative role. More details on ‘Junge’ the movie was posted earlier.

‘Junge’ is directed by Utkal Thapa. The cinematographer is Susan Prajapati, Subash Koirala has written the script and the dialogue is written bySS Agraj. The movie is about Junga Bahadur Rana in the present political context. There is another movie by the same name, featuring Melina Manandhar in leading role – Watch ‘Junge’ here.

Watch trailer of ‘Junge’ to know more about it:

The movie is directed by Ranjeet Rana Magar.

The trailer of ‘Baazigar’: