Three new movies have broken the tradition of releasing the new movies on Friday and released on Thursday. The movies released on January 12, 2016 include Keki Adhikari’s movie ‘Love Sasha’, Nikhil Upreti’s movie ‘King’ and Saugat Malla’s movie ‘Shabda’. All three movies are widely expected movies by the Nepali movie fans. 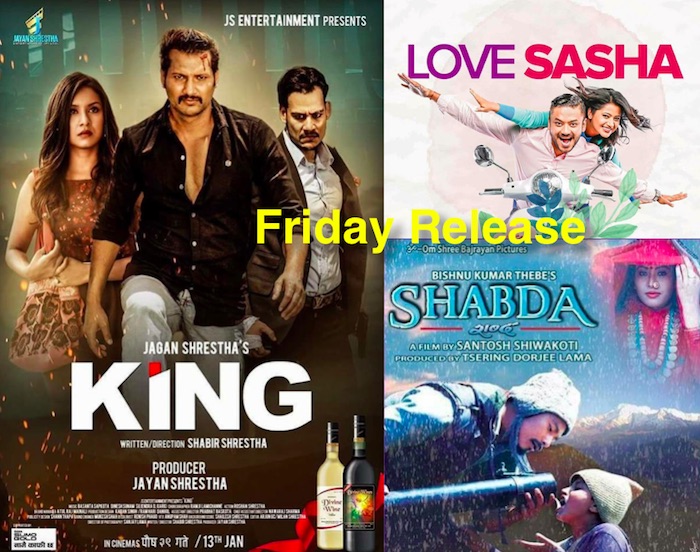 A love story movie featuring actress Keki Adhikari, Ashif Shah and Karma Shakya is directed by Prachanda Man Shrestha. At the premier held on Tuesday, the movie had received positive feedback from the viewers. The movie is told to be a feel good and smooth love story.

The movie produced by the popular movies like ‘Loot’, ‘First Love’ and ‘Chhadke’, Madhav Wagle tells the story of a woman who returns from Australia to marry a guy. But, the situation changes such that she falls in love with another guy. The movie features cinematography of Shivaram Shrestha, is edited by Lokesh Bajracharya, music by Ashisf Sha and Jeshan Kunwar.

The movie shot in the beautiful location of Siklesh of Kaski is about love and relationship with the children. With Saugat Mall in leading role, Anubhav Regmi is featured as a child artist. The actress Kamali Waiwa was previously featured in ‘Bhimdatta’ and ‘Kahi Din Kahi Raat’. Actress Osin Bhattarai is debuting as an actress in the movie. The artist popularly known as Bhangari Don, Arjun Gurung is also featured in the movie. The movie directed by Santodh Siwakoti features music of Rajan Raj Siwakoti and Suresh Gaire.