The first new movie released after April 25 earthquake, ‘One Side Love’ was released all over Nepal on July 3, 2015. The love story movie  is directed by Devendra Raj Pandey and is presented by Warble Production.

Produced by Kapil Khatri, ‘One Side Love’ features Kapil with Raj Sunam, Sabina Karki, Beenita Ghimire, Sushil Pokharel and others. The movie was released in about 50 screens all over Nepal.

After more than two months of earthquake, life in earthquake affected area has slowly started to go normal. The viewers in foreign release films has also increased in that time. ‘One Side Love’ producer Kapil Khatri also wants to benefit from the entertainment needs of Nepali movie viewers. It seems, new Nepali movies will slowly start to resume their release cycle. Biraj Bhatt movie ‘Jungbhumi’ is releasing next week, and more releases are expected to follow in coming days. The result of ‘One Side Love’ will also determine the future direction of the movie releases.

The movie was previously scheduled to release on Jestha 8. The promotion and release preparation halted by the earthquake a month earlier. 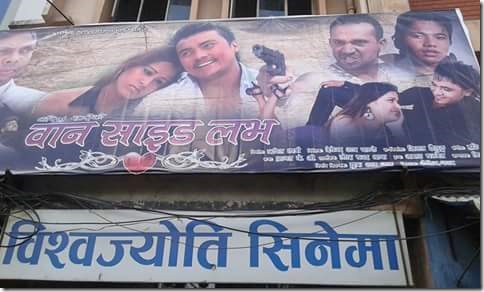 Sabina Karki in ‘One Side Love’:

4 thoughts on “Friday Release – One Side Love, the first post-earthquake release”