NOTE: For the fans of Biraj Bhatt, we have posted his 2014 release movie ‘Gunda’ (watch ‘Gunda’ here). 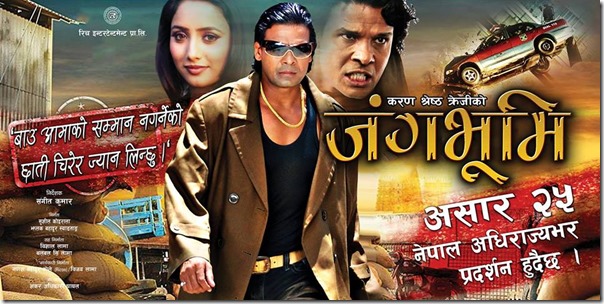 So far, none of the Bhojpuri-dubbed movies of Biraj Bhatt had been successful among Nepali viewers. Although the distributors have claimed that the movie was made both in Nepali and Bhojpuri, the trailer clearly shows the Indian settings. To add to the suspicion, there is no dialogue in the trailer. The trailer shows only action scenes.

The movie is presented by Karan Shrestha Crazy, names of the producers are Sushil Koirala and Jhalak Bahadur Syangtang and the executive producers are Ganesh Bahadur Gole and Bijay Lama. The director is Sangeet Kumar.

Full list of the movies of Biraj Bhatt available in xNepali are:

2 thoughts on “Biraj Bhatt movie, Jungbhumi to release on July 10”