This week, on August 11, 2017, a new movie of Nikhil and Saugat is released in theatre, ‘Sarakshan’. The movie directed by Purnendu Jha, is an action movie shot in Terai’s Parsa and it’s neighbouring districts. The movie made on the politics in the villages and cities in Terai region features some of the best known actors in the Nepali film industry. There were no Nepali movie release last week, so ‘Sanrakshan’ enjoys the solo release and no competition advantage. In addition to that, the star cast in the movie with Nikhil and Saugat in leading role are another attraction towards the movie for a wide range of movie goers. 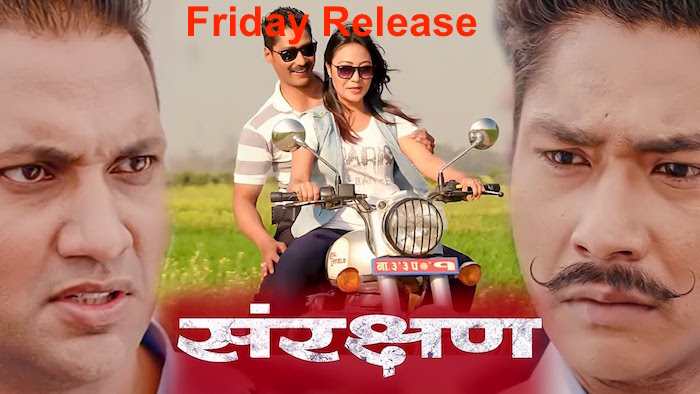 The movie features the Madhesh unrest, crime in Terai, police actions and other social aspects of Terai. In the movie, both Nikhil Upreti and Saugat Malla are featured as police officers.

The cinematographer is Purshottam Pradhan, editor is Surendra Paudel, action by Himal KC,
choreography by Kabiraj Gahatraj and music composed by Pravesh Mallick. The background score is prepared by Iman Bikram Shah, the lyrics of the songs are written by Dr. Krishna Hari Baral, Dermendra Premarshi, and Roshan Janakpuri. The movie is written by the direcotr Purnendu Jha in association with Ramesh Ranjan. The producers of the movie are Narendra Maharjan, Pradeep Kumar Udaya, Nandu Shriwastav, and Shweta Shah.

Trailer of the movie

A song from the movie: