The Bollywood actor and dancer, Hrithik Roshan, was one of the guests of the finale of Jhalak Dikhalaja, Season 9. After watching the performance of Teriya Magar and her partner, Hrithik was so impressed that he offered to dance with them in a movie. He said,’I is a wrong thinking that girls can’t do as well as boys. Today Teriya, you have ruled.” He added, “I wanted to try this at one time. At that time, I want you to do it with me.” He also added, “And, we will do it in a movie.”

Was Hrithik’s offer a credible offer?

Technically, it was not an offer. It was a plan Hrithik Roshan made right after watching Teriya’s performance. It was a impulse reaction without any backup plan. So, there is no plan of her role in any movies. I don’t know if Hrithik will remember his offer.

But, her performance has certainly impressed a well known superstar of Bollywood. That means, even if Hrithik didn’t offer her role, somebody else will. Teriya’s response to Hrithik’s offer was, “It’s a pleasure.”

In an interview after the event, Teriya was asked if she would do Bollywood movie. She told that she was interested in acting. But, at the same time, she also told that she has no such plans and doesn’t know what will happen in the future.

Should Teriya do Bollywood movie?

Now, Teriya is 14 years old. She is still a child and is too young to act as an actress. She wouldn’t be fit for a leading actress now. Any serious producer or director would consider the age factor before making an offer.

If Teriya gets an offer, she should seriously read the script and decide on if it would be helpful in making what she wants to be in future. She should also consult experts in that matter and make a calculated and informed decision. Acting and dancing go hand-in-hand and her talent would benefit by acting in movies. 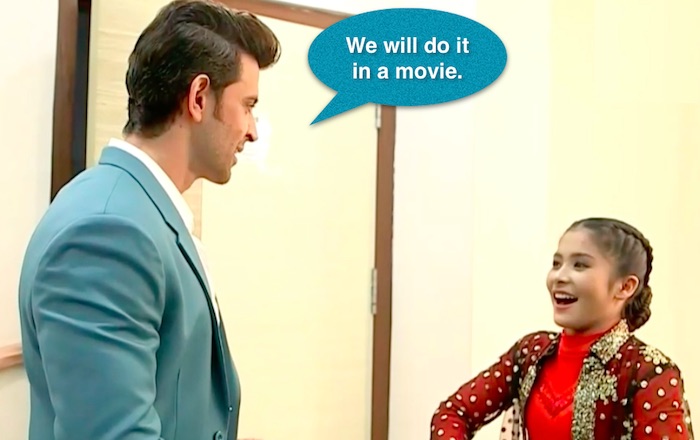