On April 28 we lost a Bollywood and Hollywood actor Irrfan Khan – one of the most talented actor of all time. The very next day, on April 29, Bollywood lost another superstar, Rishi Kapoor. That was a double loss to Bollywood film industry.

After the death of Irrfan Khan, Anand Nepal YouTube channel viewers had asked me to do a biography of Irrfan. I wasn’t keen on making one because, I only talk about things related to Nepal and Bollywood is Indian film industry. But, later I found out Irrfan’s Nepal connection and hence decided to do a biography. While going through his social media post, I found:

– He was diagnosed with a rare form of cancer in March of 2018
– He went to UK for treatment and went through a-year-long treatment in London.
– He returned back to India in April of 2019.
– Right after returning he did a movie ‘English Medium’. The movie was released in March 2020. Irrfan had talked about the film in his social media. His last post was about the movie.
– On April 27, all of a sudden he fell ill, was rushed to hospital. According to media report, the complication wasn’t related to cancer. He was told to be cancer free.
– He died on April 28, 2020

I made a short biography about Irrfan Khan:

END_OF_DOCUMENT_TOKEN_TO_BE_REPLACED

In the LG Cine Circle Film Award 2018, held in Kathmandu, Bollywood star Govinda was the main attraction. He was called ‘Jwai’ by the organizer and he also claimed, his first love “was a Nepali girl.” He told that his wife Sunita is a Nepali. But, is that true?

At the airport, when Govinda landed in Kathmandu, journalists asked Govinda if he knew Nepali. He told, he couldn’t speak it but he understands the language. Govinda was accompanied by his daughter Tina Ahuja (Narmada Ahuja). She told she knows Nepali a little. But, she was comfortable speaking in Hindi. I named her ‘Rastriya Bhanji’ and made a video report:

The main question – Is Sunita a Nepali Citizen?

A short answer to the question is ‘No’.
END_OF_DOCUMENT_TOKEN_TO_BE_REPLACED

[[Biography of Sridevi and the news about her death.]] 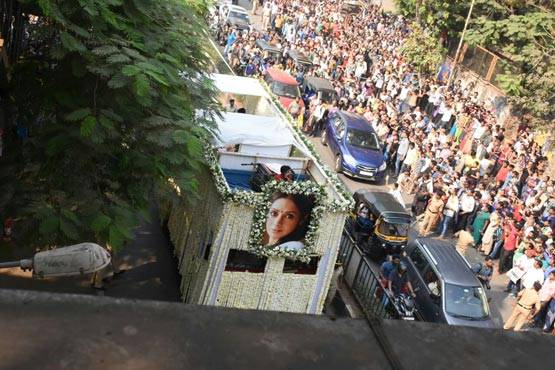 During the last ritual, full makeup was done on Sridevi and she was dressed in bridal dress. The truck that carried Sridevi’s body was covered on white flower. In the truck, her husband Boney Kapoor, son Arjun Kapoor, daughters Janvi Kapoor and Khusi Kapoor and her brother-in-law Sanjay Kapoor were present. For the last goodbye, a huge crowd of her fans were present on the route the truck was driven. The roads were filled with her fans. The police had to use force at places to control the crowd.
END_OF_DOCUMENT_TOKEN_TO_BE_REPLACED

Indian actress SriDevi has died on Feburary 25, 2018 while in Dubai participating in a marriage ceremony.

The last video and photos before she died:

Shreedevi was born in Sivakasi, Tamil Nadu, India on August 13, 1963. Her real name was Shree Amma Yanger Ayyapan. Her father was Tamil lawyer and her mother was Telugu.
END_OF_DOCUMENT_TOKEN_TO_BE_REPLACED

There was a rumour about Miss Nepal 2012, Shristi Shrestha, to debut in a Bollywood movie. The rumour was about her role in a movie titled ‘Sandeep Aur Pinki Farar’, planned to be shot in Nepal and made under Yashraj Banner. But, the actress has denied the rumour and has told that it was a false information. In the Facebook she wrote, “Information might be power but disinformation is abuse of the power.” 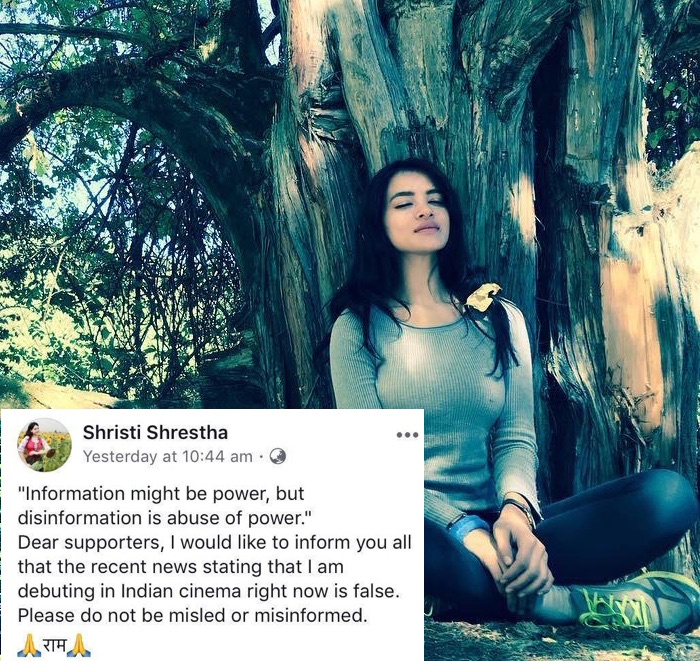 According to report, Shristi had gone to Mumbai for the audition of the movie. She left the shooting of ‘Romeo and Muna’ in East Nepal to go to Mumbai. But, before the production banner made the decision of the audition, the rumour was released in media. The actress was stressed out when she received numerous congratulatory messages. She finally wrote a message that the news of her debuting in Bollywood was false. She wrote, “Dear supporters, I would like to inform you all that the recent news stating that I am debuting in Indian cinema right now is false. Please do not misled or misinformed.”

Although Shristi has told it to be false, some believe that she has already landed in the role in the Bollywood movie.
END_OF_DOCUMENT_TOKEN_TO_BE_REPLACED

Actress Manisha Koirala has told that she is going to be a mother. She got married in 2010 to Samrat Dahal, but the marriage didn’t last long. They were separated in less than a year. The formal divorce was done in 2012. After that, she was diagnosed with ovarian cancer. She was treated in the USA and became cancer free. It is going to be 5 years of her being cancer free soon.

How can a single woman, that too with problem with her reproductive organs can be a mother ? Yes there is a way – the Bollywood actress of Nepali origin, actress Manisha Koirala has told that she is going to adopt a child this year. She is planning to adopt a girl child and be a responsible mother.

The details about if the girl to be adopted is identified or not is not released. She just told that on the fifth anniversary of of winning cancer, she is going to adopt a child.

END_OF_DOCUMENT_TOKEN_TO_BE_REPLACED

The Bollywood actor and dancer, Hrithik Roshan, was one of the guests of the finale of Jhalak Dikhalaja, Season 9. After watching the performance of Teriya Magar and her partner, Hrithik was so impressed that he offered to dance with them in a movie. He said,’I is a wrong thinking that girls can’t do as well as boys. Today Teriya, you have ruled.” He added, “I wanted to try this at one time. At that time, I want you to do it with me.” He also added, “And, we will do it in a movie.”

Was Hrithik’s offer a credible offer?

Technically, it was not an offer. It was a plan Hrithik Roshan made right after watching Teriya’s performance. It was a impulse reaction without any backup plan. So, there is no plan of her role in any movies. I don’t know if Hrithik will remember his offer.
END_OF_DOCUMENT_TOKEN_TO_BE_REPLACED

In addition to the artists mentioned above, other Nepali artists who worked in Bollywood include Jharana Bajracharya (in Love in Nepal) and Karishma Manandhar (in Danga Fasad).

END_OF_DOCUMENT_TOKEN_TO_BE_REPLACED

The prime minister of Nepal, KP Sharma Oli is scheduled to meet some well known Bollywood actors and producers in New Delhi. The meeting is being held in coordination with the Nepal Embassy in New Delhi with the help of Bollywood actress of Nepali origin, Manisha Koirala. 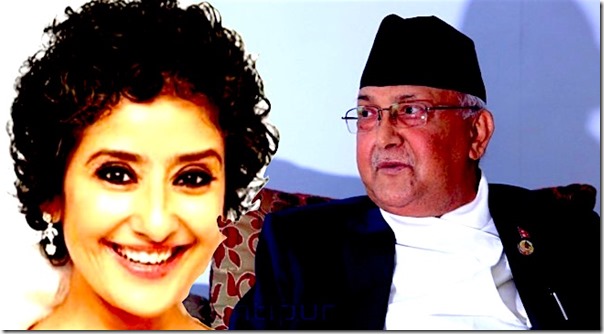 According to a report in the Times of India, Oli will meet actor Jackie Shroff, director Subash Ghai, producers and other well known Bollywood personalities.

END_OF_DOCUMENT_TOKEN_TO_BE_REPLACED

Nepali actor Biraj Bhatt and Bollywood actor Shakti Kapoor have teamed up to act in a Bhojpuri movie. Being too busy in Bhojpuri movies Biraj hasn’t appeared in Nepali movie for a while. All the recent movies of Biraj released in Nepal are dubbed Bhojpuri films. The last movie of Biraj titled ‘Jungbhumi’ was released on July 10. 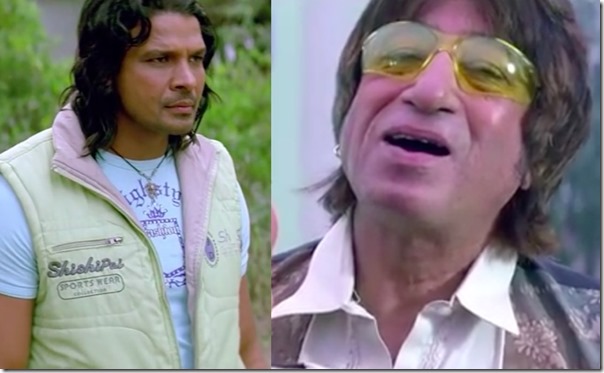 END_OF_DOCUMENT_TOKEN_TO_BE_REPLACED

In a Facebook status post, previous adult film star of Hollywood and the current Bollywood sensation, Sunny Leone, has said that she is ‘working on something special for Nepal … ‎#getsexy‬ see you soon Nepal xoxo’. She hasn’t given any further clue on what her plans are. 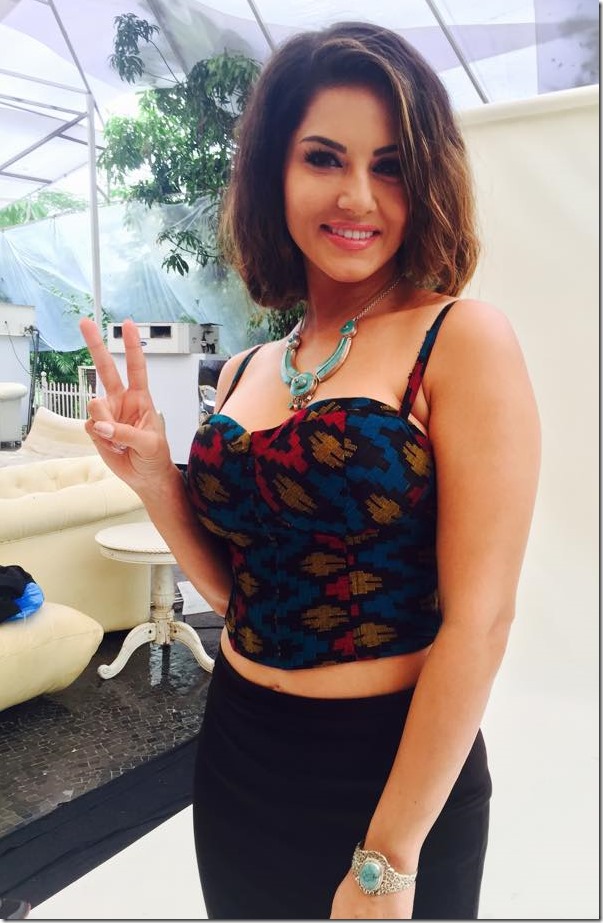 Based on her message she is involved in something related to her profession. It might be a shooting or some sort of a program. Her #getsexy hashtag in the message rules out any social works. We will surely know more details of her visit in near future.

END_OF_DOCUMENT_TOKEN_TO_BE_REPLACED

Miss Nepal 2012, Shristi Shrestha, is featured in a remix video of a popular song of a Bollywood movie ‘Jackpot’. The music video features the actor of the movie Sachin Joshi opposite to Shristi. In the original filming of the song ‘Kabhi Jo Badal Barse…’ actress Sunny Leone was featured opposite to Sachin. 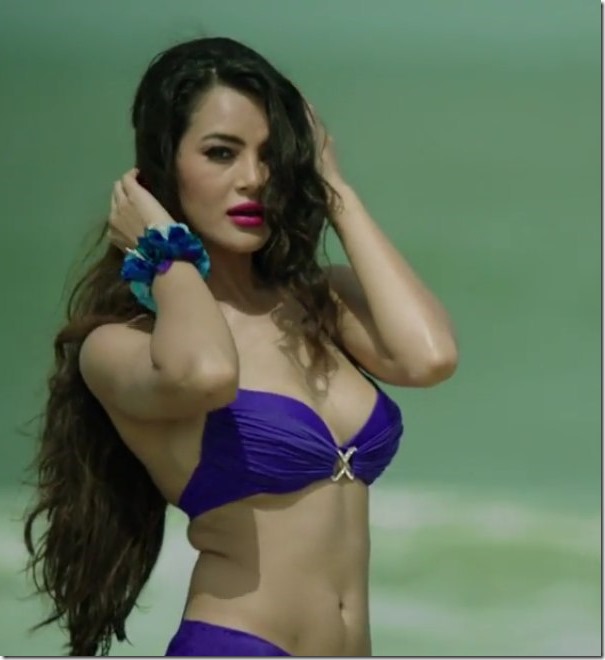 In the music video, Shristi seem to be a competition to Sunny in terms of the sensuality (watch the video to decide):

END_OF_DOCUMENT_TOKEN_TO_BE_REPLACED

A number of Bollywood celebrities have expressed their concern towards the devastating earthquake in Nepal. Here are the sayings of of the celebrities from our neighboring country:

Right after the earthquake, Bollywood megha-star Amitabh Bachchan told that he was saddened by the disaster. He wrote in Twitter, "Seeing devastating pictures and news of the earthquake in Nepal ! Prayers that all is well and all are safe." He later added:

END_OF_DOCUMENT_TOKEN_TO_BE_REPLACED

It is not the first time of Sushmita to visit Nepal. Last time Sushmita was in Kathmandu to participate in a fashion show. She has plans to visit Pashupati and other places in the valley.
END_OF_DOCUMENT_TOKEN_TO_BE_REPLACED

UPDATE – Photos of the fashion show are available here. Raveena Tandon looked like a Nepali bride in the show.

To participate in a Jewelry Fashion show by Nepal Gem and Jewelry Association, Bollywood actress Raveena Tandon has arrived in Kathmandu.

Raveena will wear and promote Nepali Jewelries in the show to be held on November 5, 2014 at the Hotel Yak and Yeti. Nepali models will also join Raveena in the ramp. 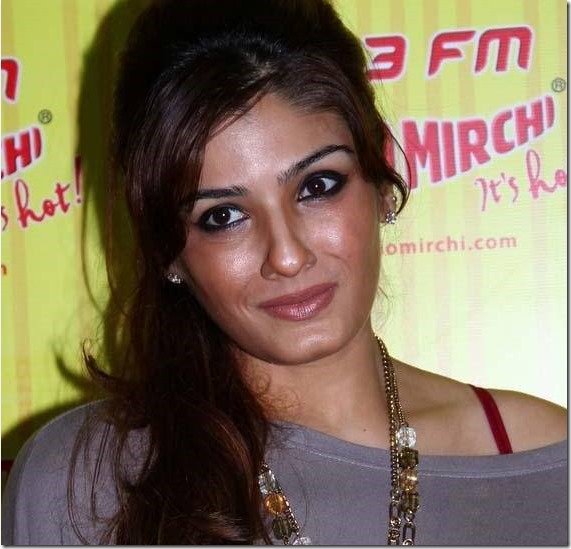 After landing in Nepal on Tuesday Raveena expresses her happiness to visit the birth place of Gautam Buddha and the country of Mt. Everest.