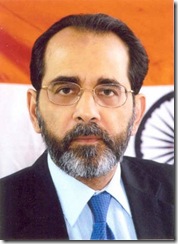 0 thoughts on “Indian Ambassador Rakesh Sood to be called back?”