On the proposal of the Indian Prime Minister, Narendra Modi, starting this year, June 21 is being celebrated as the International Yoga Day. Although the popularity of yoga in our Nepali celebrity circle doesn’t seem to be that much, we have collected and shared the experiences and best wishes of some celebrities on the Yoga Day.

Actress Namrata Shrestha says that, her father had introduced Yoga to her. These days, she practices meditation and relaxation – one of the branches of yoga.

The Indian Embassy in Kathmandu had organized a Yoga workshop to mark the International Yoga Day. The comedy duo MaHa (Madan Krishna Shrestha and Hari Bamsha Acharya) participated in the event. In his Facebook post, Madan Krishna has said, “Happy International Day of Yoga. We did Yoga today in Indian Embassy and in Pashupati area. Yoga is good for health, brain and prosperous life.”

Actor Raj Ballav Koirala says, Yoga is necessary to ‘cleanse your body, mind and soul…’ He wishes peace and serenity prevail in our lives through prayers, meditation and yoga.

END_OF_DOCUMENT_TOKEN_TO_BE_REPLACED

A consumer advocate group has asked the government to investigate the involvement of actor Rajesh Hamal, actress Karishma Manandhar, sportsperson Dipak Bista, and businessman Min Bahadur Gurung for appearing in the advertisements of the controversial drink Real Juice.

It was told that Rajesh Hamal received a whooping Rs. 1.2million to be featured in the ad. That is, 3-4 times the amount he receives for acting in a full movie. Others should have received a smaller but considerable sum to act for the ads.

END_OF_DOCUMENT_TOKEN_TO_BE_REPLACED

In the wake of various reports of non-consumable products in one of the Dabur Nepal’s product, Real Juice, Indian Embassy was worried on its "National interest" in Nepal. Dabur threatened to take back its investment. The issue was more of a tussle between some journalists and Indian Embassy than Dabur or Real Juice.

END_OF_DOCUMENT_TOKEN_TO_BE_REPLACED

Kantipur didn’t know when Miss Nepal 2010 was held (at least its loyal readers don’t). Last time, I questioned their loyalty to their readers and specifically asked for their explanation. I wrote emails to the kantipur officials, with the links to those posts about Miss Nepal and Kantipur. But, they played deaf (attached email screenshot), yet again! It was not the first time I didn’t get a reply from them. Last time, when I wrote about Smita Thapa and Maya Bazin, my emails didn’t get any reply.

A hat-trick of no replies is enough to prove that that the Kantipur officials are self-centered, short-sighted, and don’t know their responsibilities.

END_OF_DOCUMENT_TOKEN_TO_BE_REPLACED

The Real Juice, Real Embassy, Dabur Nepal, and Kantipur were center of attraction for for me, for some time. Now, it is Nayapatrika that came out with another version of the same story – extra materials in the juice. The same unanswered questions are being asked:

Why are our kids being fed such non-consumable items ? Why is the government silent on this issue ? (Even, India felt the heat and was talking)

END_OF_DOCUMENT_TOKEN_TO_BE_REPLACED

[Update: I had written the original post in a hurry so, I have changed some wordings. I hope Kantipur editors will come up with some valid arguments.]

Some people thought that my previous article, Journalism Ethics, Dabur and Miss Nepal, was biased. I want to make myself clear, by telling that, I still believe in the spirit of the article, Indian Embassy – Real Juice – Real motive, and Indian Media, I wrote on August 28. A few points:

My friend Aakar argued that he thinks Kantipur publication is doing what it should. Dipak Bhattarai and Aakar sent me the link to The Hindu article. It was a very detailed and in-depth analysis of the background of the current problem. I have summarized the articles below:

END_OF_DOCUMENT_TOKEN_TO_BE_REPLACED

A parliamentary committee in Nepal has directed the Nepal Government to take action against the Indian Embassy in Nepal for the press release, that is against the diplomatic norms.

END_OF_DOCUMENT_TOKEN_TO_BE_REPLACED

As if the involvement in the formation of government in Nepal wasn’t enough, when the Indian Embassy (dubbed Real Embassy) started talking about how corrupt our media are, and that the tainted Real juice was only a media propaganda.

END_OF_DOCUMENT_TOKEN_TO_BE_REPLACED 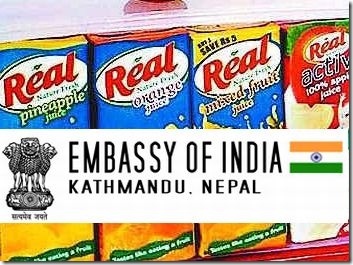 Even if Nepali press have exaggerated (which doesn’t seem true) some unanswered question are:

There were reports about the tainted products from all over Nepal. Given our media house’s capabilities and dedication, I don’t believe Nepali media can create such a large scaled fabricated story (as Indian Embassy told). And, it was not a single media house that reported the story. Apart from Nayapatrika, Weeklynepal, ABC news, Kantipur, radiomirmire, Pokharatoday, Pokharanews, Yubabahas; a lot of media had published independent news on the issue.

However, Indian media are doing their own media campaign against Nepali media. (When Embassy itself is that irresponsible, I can’t blame the Indian media!)

Some of the headlines in Indian media: