One of the most awaited Nepali movies ‘Loot 2’ was released on this Friday, February 24, 2016 (Read ‘Loot 2’ Release news). The success of the original ‘Loot’ had increased the expectations and desire in the viewers. That is the reason, most of the prospective viewers ask, “Is ‘Loot 2’ as good as ‘Loot’?” The answer to the question is not easy. Some think it is better than the original but, others think that it is not. Everybody agree that the movie entertaining and it could have been made better. Here is the detailed review of ‘Loot 2’ by Saurav Raj Tiwari: 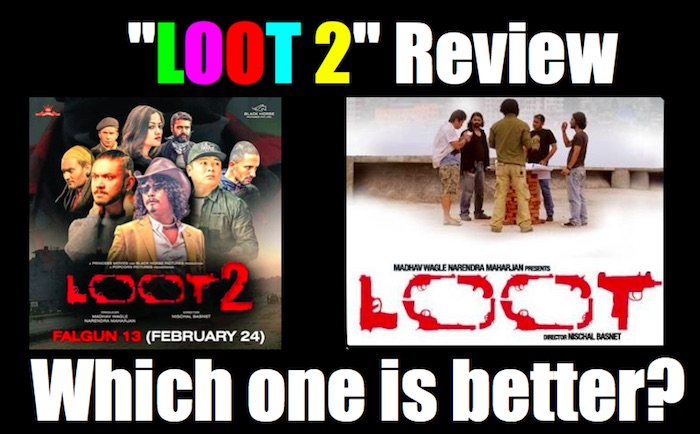 The original movie ‘Loot’ was was made and released before earthquake and Indian blockade and was about bank robbery. The movie ‘Loot 2’ is set at the time of the Indian blockade, after the earthquake of 2015. In the movie, four of the characters Gofle (Dayahang Rai), Nare (Karma), Deban (Prateek) and Pandey (Sushil) run away from the jail right after the earthquake. The fugitive four are in search of Haku Kale (Saugat Malla) believing that Haku Kale was the cause of their arrest.

The economic blockade of India had created an opportunity for Haku Kale to make a lot of money. Haku Kale’s economic standard has raised and his dress up and life style is different. His relationship with Putali (Srijana Subba) has also improved. The story and events are very binding till the mid-way of the film. After the first half, the grip gets loosened. The pace of the events in the first half is good, but is becomes slower in the second half. I don’t want to reveal the whole story of the movie here.

The director has developed the character of Haku Kale very carefully and Saugat has also justified his role in an excellent way. Similarly Dayahang Rai has done an excellent job in his role. The script has favoured Saugat and Dayahang cutting the roles of other characters. The whole movie revolves around Saugat’s character Haku Kale Some of the scenes in the movie seem longer than required.

Cinematography of Purushottam Pradhan is excellent. He has captured the shots beautifully and interestingly.

The only problem is the script written by the director Nischal Basnet himself. Some of the scenes in the movie look like that of the original ‘Loot’.

The script has some shortcomings, but the dialogues are excellent. The viewers fully enjoy watching the movie. Some reviewers have told that ‘Loot’ is not as good as ‘Loot 2’.

is it such a wonderful movie? Should everybody watch it ?

I have no doubt, â€˜Lootâ€™ is a good movie. But, excellent? Not really!

Now, you might ask, “Didnâ€™t â€˜Lootâ€™ deserve such a huge box office collection?”

The movie is a must watch movie. It is entertaining movie with interesting action and comedy. You will enjoy the movie if you don’t expect too much and don’t try to compare it with the original ‘Loot’