One of the highly awaited movie of the current time, ‘Loot 2’ was released in theatre on February 24, 2017. The first day shows of the movie was packed and houseful in most of the theatres. 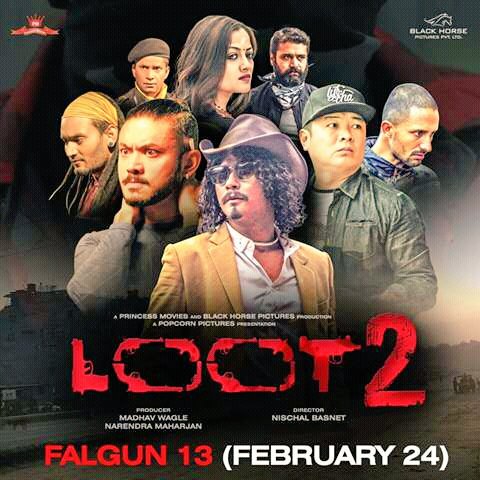 The sequel of the 2012 release movie ‘Loot’, continues the story of the characters of the original movie. Set in Kathmandu, the movie shows the typical lifestyle in the capital city. The theatres in Kathmandu, Pokhara, Chitwan, Dharan, Hetauda, Butwal also saw houseful business. In addition to the hype and publicity, the viewers have also liked the movie and the mouth publicity has also kicked in. But one of the journalists, Krishna Dhungana has told that he didn’t like the movie and asked the director the ticket price Rs. 330 back.

The main character of the movie, Haku Kale, is Saugat Malla. Dayahang Rai is featured as Gofle and the actress is Reecha Sharma.

The legacy of ‘Loot’

Watch ‘Loot’ here. I think, ‘Loot’ is one of the 10 movies of modern time, everybody should watch.

The regulating agency of the government, Film Development Board, was planning to intervene and declare emergency in the film industry. But, ‘Loot’ changed everything. The movie made by new comers, without much expectation was unheard of before release. But, right after the release, mouth publicity took over and the movie was superhit. The debut director Nischal Basnet became a superstar overnight. Saugat Malla and Dayahang Rai also established themselves in the film industry.

I had written – ‘Loot’ was the new confidence of the Nepali movie industry, in 2012.

The item song of the movie ‘Thamel Bazar’ has been the third most popular music video in Nepal in a short time. The song crossed 10 million views in YouTube a few days before the release of the movie.

The item song is much better when compared to the item song of the original movie. (Item songs compared)

According to an unofficial claim, ‘Loot 2’ first day collection is the record breaking amount of 1.53 crores. As there is no official agency to give this data, the amount should be taken with a grain of salt.