Nepali movie ‘Hostel’ was released on August 30 in theaters all over Nepal. The movie is produced by Sunil Rawal under Durgish Films. The movie features the friendship of three characters played by Anmol KC, Salon Basnet and Gaurav Pahadi. Actresses Rista Basnet and Prakriti Shrestha are also featured in important characters in the movie. Although the movie is advertised as a college love story, it is more about friendship and relationships. The movie is directed by Hemraj BC. 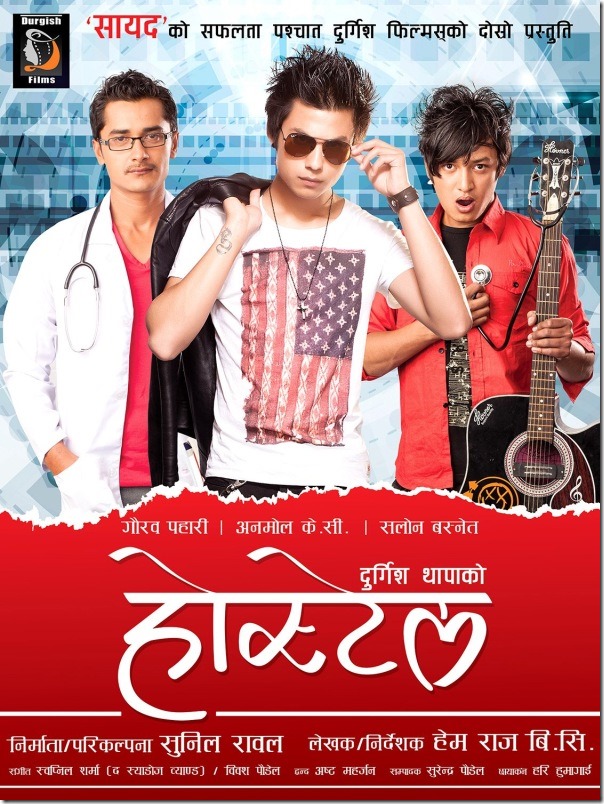 The movie is the story of Aditya Bikram Rana (Anmol KC), Junge (Salon Basnet) and Shree (Gaurav Pahadi) – three medical college students living in a hostel. Aditya is from a rich family, Junge is from a medium income family and Shree’s background is not clear in the movie. They go through every ups and downs a young student goes through hostel life. There is love, tragedy, betrayal, friendship, family relationship, classroom, hostel warden and so on.

The producer of ‘Hostel’ Sunil Rawal was successful in winning the hearts of viewers in his debut movie ‘Saayad‘. Based on the the initial crowd in the theaters, ‘Hostel’ is going to be much more successful than his previous movie. In addition to producing good movies, he is also known to debut new talents in Nepali film industry. He introduced Samyam Puri, the son director Narayan Puri in the last movie. In his second movie he experimented in a huge way by introducing some high profile star sons and daughters in ‘Hostel’.

Although Anmol Kc, the son of actor Bhuwan KC, was featured in a very short role in ‘Sathi Ma Timro‘, ‘Hostel’ is his debut movie in leading role. With the success of the movie, Anmol is believed to be the next big star in the Nepali movie industry. In the movie, Anmol is featured as a son of a rich father and is the central character in the movie. He is a bit disconnected with his family, often ignoring his mother’s call.

Salon Basnet, the son of actor/director Shovit Basnet is featured as a student from a medium class family. The family had to borrow money to pay for his tuition. He is careless of his study and is humorous in the movie. In the first half of the movie Salon gets a lot of focus in an entertaining way. In the past, Salon had worked as child actor in a lot of movies and he had also acted in ‘Janzeer’.

The role of Gaurav Pahadi, the son of actor Tika Pahadi, is not that well defined. He is featured in a serious character. Gaurav had debuted as the lead actor in ‘Manjari’. 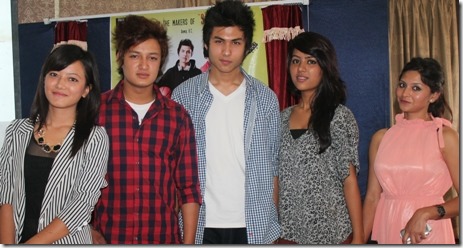 The movie is strong in portraying the life of college going youth, their hardships and problems in an entertaining way. The attempt to present the college life is a challenge the director has fulfilled successfully. The youth actors have done a very good in portraying the characters they represent. The movie is going to liked by youth as some might see themselves in one of the characters in the movie.

The weakest point in the movie is the script or the presentation of the story. Unrealistic scenes like the MBBS students get to wear stethoscope on the first day of college, or unrealistic dialogues, lack of coordination between the dialogue and actions are some of the things the director has overlooked.

If you have ever been through a college life, there might be something entertaining in the movie to go for. ‘Hostel’ is an entertaining relief in a long list of failures. It has a potential to be successful in spite of some weakness.

I recommend going to the movie for entertainment although I wish, the script were written in better manner.