The most awaited and hoped-for Nepali movie, Miss U, is released today in theatres all over Nepal. The movie features a story of three best friends, played by Namrata Shrestha, Dillip Raymajhi and Barun Rana. The movie tries to prove the saying that, a boy and a girl can’t be best friend forever. Friends of opposite sex, at some point, can fall in love and either their friendship gets scattered or, becomes weaker or, they might at best be happy couple. 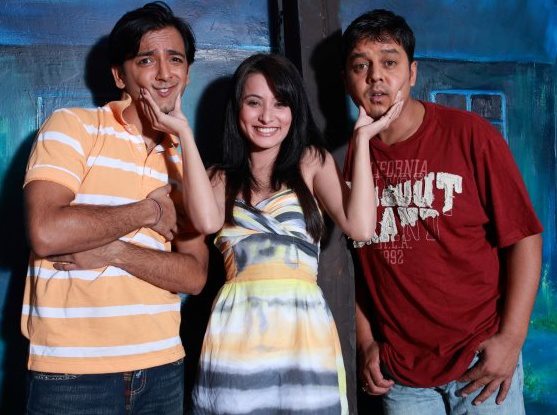 ‘Miss U‘ is the story of three best friends Sanjh (Barun Rana) , Sakshyam (Dillip Raymajhi) and Jasmine (Namrata Shrestha). Their friendship probably started in some foreign college they went together. They have a desire to stay best friends forever. Sanjh falls in love with Jasmine from the beginning but, couldn’t express his feelings towards her. On an incident in a pub, Jasmine came to know about his feelings towards her and accepts his love towards her. In one occasion when Sanjh was in Nepal to meet his family in Dashain, Sanjh and Sakshyam got drunk and had a physical relationship. The Dashain celebration incident is the turning point in the story of the three best friends. Revealing what happens after that would spoil the fun of watching the movie.

The director, Suresh Darpan Pokharel, had previously said that the movie is not a formula movie based on Bollywood masala. His statement holds true, Miss U doesn’t seem to be inspired by Bollywood movies as in his previous movie “Kaslai Diu Yo Jowan”. As a director, he has done a good job. He has also tried to showcase beautiful locations abroad, in appropriate scenes. He has failed to strengthen the story so that the story ‘touches’ the audience. Although, being successful in shooing masala type of contents, he has failed to supplement it with something more interesting.

The story and screenplay of Suraj Subba ‘Nalbo’ is appreciable. Story and it’s flow is really nice and logical. All the scenes and situations of the movie are related to each other. There isn’t any such scene or dialogues that feel out of context for the story. Cinematography of Dhiraj Jung Shah and Raju Bikram Thapa is nice. Background score by Rajan Ishan is suitable and reflects the situations. Songs are also melodious and well performed except a ghazal sung by Baboo Bogati. The ghazal seem quite long and ineffective.

One of the most important factors of this movie is the comeback of Namrata Shrestha in a feature movie. Her fans and supporters will surely love her back in the big screen. Dillip Raymajhi’s character as Sakshyam is similar to the character of his first super hit movie, ‘Darpan Chaya‘. Dilip has also performed well in the movie. This movie is believed to determine the future of his career on Nepali film industry.

New actor Barun SJB Rana’s role is also very important in the movie. Although, Barun is handsome and good looking, another actor/ singer Yash Kumar had given his voice to his character. That might be the reason, his expression of the body and face doesn’t go well with the vocal expression. This shortcoming has made the character of Sanjh weak. Proper time and effort might have corrected the problem. Barun shouldn’t have been chosen for the role if he was known to have problem with dialogue delivery. Being an important character in the movie, the director should have taken an extra effort to correct the dubbing and dialogue delivery.

Over all, ‘Miss U‘ is a good movie with a nice and logical story of three friends. Although, the director has tried to be creative by avoiding Bollywood masala, the movie seems to be influenced by Korean movies and serials. Although the movie has a good story and is made well, audience however won’t get any emotions or feelings from the tragic situation of the movie. One of the biggest drawback: the tragic ending of the movie won’t leave a mark in the hearts of the audience.

‘Miss U‘ will be loved by the youths and especially the fans of Namrata Shrestha. The movie could have been a strong competitor to other blockbuster movies at box office but, it has missed to generate emotional touch in the heart of audience. Fan of Korean movies and serials would probably love the movie.

Yes, Suresh Darpan Pokharel has given a good movie to the Nepali movie industry and the youths but, one can’t deny that he has also missed making it big!

7 thoughts on “Movie Review – Miss U”