For the last two decades, Nepali film industry has been ruled by Rajesh Hamal and his craze hasn’t diminished to date. The new comer actors had tried to follow his path, but none have succeeded. Hamal represents masala types of movies with common ingredients like action, comedy, songs, and glamorous actresses.

After the release of "Sano Sansar" and "Kagbeni", Nepali movies had stepped in new direction creating a sharp contrast between the two groups of film makers.

Category one represent the movie with action, comedy, songs, glamorous actress and special stunts of actors/ actress. Most of these movies used to feature actors like Rajesh Hamal, Nikhil Upreti, Biraj Bhatt, Rekha Thapa and so on. The success of those movies used  to depend on specials aspects like dangerous stunt, or kissing scenes and glamorous scenes, or even Rajesh Hamal’s dialogue delivery. Such a trend made Nepali movie popular in remote parts in Nepal and alienated so-called well-to-do city dwellers.

In 2008, a music video director, Alok Nembang, made "Sano Sansar" and another young director, Bhusan Dahal, released "Kagbeni". Both of these movies introduced new crew members and both were not targeted to the so-called regular Nepali movie viewers but, the young generation. And those not-so-regular Nepali movie viewers liked them very much. Although both of the movies were extremely popular and liked by many. Although, they could not do a good business, it was clear that there is another group of movie lovers who would love movies not made on masala movies.

After that, new faces and directors have started making Nepali movies every year. And contrast is evident in Nepali movie industry with one group of film makers making movies targeted to "regular Nepali movie viewers" and the other group making movie targeted to youngsters and city dwellers. For the last few years, we have witnessed the "regular type of movies" win the box-office game, earning more than non-masala movies.

Now, it seems, the situation has changed. It seems, the days of actors like Rajesh Hamal and Nikhil Upreti are over as they have produced more flops than hits. Last year’s movies like "First Love" and "Bato Muni ko Phul" had received good reviews and they had also earned a decent revenue; creating hope for new film makers. The success of "Loot", this year, has made the new movie makers even more excited.

Tomorrow, on February 17, Friday, three movies are being released representing both the generations of Nepali movies. 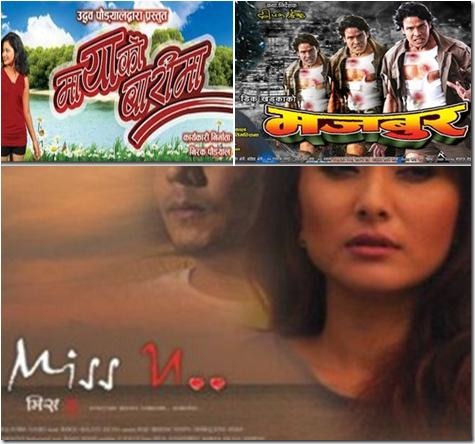 It is to be seen if "Miss U" will prove that the new generation are capabale of running the show in Nepali movie industry or if there is still hope for the movies like "Majboor" or "Mayako Barima".

As for the viewers like us, it is a win win situation!