After winning the Best Actress Award at the D Cine Award 2016, actress Namrata Shrestha has won three Best Actress Awards in a row this year. All three awards were awarded for the acting she did in ‘Classic’. In the movie, Namrata was featured as a blind woman opposite to another blind character played by Aryan Sigdel. The actor Aryan Sigdel was also awarded the best actor award in two of those awards.

It was not only this year, Namrata Shrestha had also won the Best Actress Award of 2015 for her role in ‘November Rain’, last year.

Namrata Shrestha debuted in Nepali movie industry as an actress in ‘Sano Sansar’. But, ‘Sano Sansar’ wasn’t her first movie. She was also featured as a child artist in ‘Sangani’. The movie was a hit movie. Namrata’s second movie ‘Ke Ma Timro Sathi Banna Sakchhu’ was also a superhit movie. At that time, because of a sex scandal, Namrata went in hiding for some time. After that, she came back to the film industry – more matured and determined. It seems, she is headed to becoming the top actress in the Nepali film industry. Namrata was also selected one of the top 10 women of 2016 by a Saptahik poll.

All the best Namrata Shrestha! 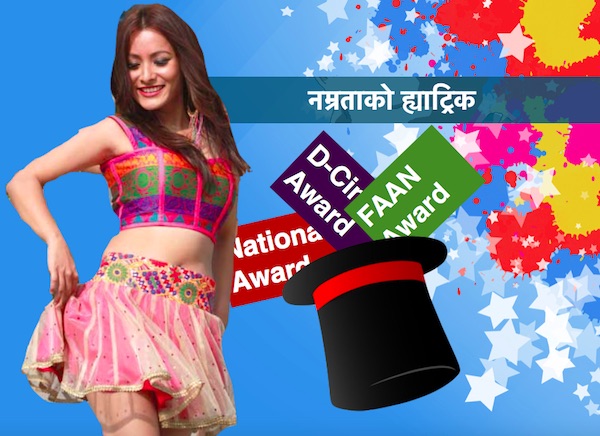