About ‘Angalo Yo Mayako’

A presentation of Radha Thapa, the movie ‘Angalo Yo Mayako’ is made under Sinai Commercial banner. The director Vinod Shereng has also written the screenplay of the movie made on the story of Devi Maya Rai. The cinematographer of the movie is Yuvaraj Rai, editor is Bipin Malla, choreographer is Gobinda Rai, action by Ratna Deola, and background score by Sanjay Shrestha.

Star Cast of ‘Angalo Yo Mayako’

The Indian Idol 3, Prashant Tamang debuted in Nepali movies in ‘Gorkha Paltan’. The movie was successful and that helped Prashant to do more movies. Another hit movie of Prashant is ‘Pardesi’. Mahendra Gurung and Bijayata Baraily have debuted in the big screen movie in this movie. Bijayata Baraily is one of the popular music video models of Sikkim, India. Most of the star cast including the director Binod Shering are from Sikkim. Other star cast in the movie include Prem Subba, Chunnilal Ghimire, Mahendra Bagbas, Mahendra Bajgai, Hemant Giri, Pradip Pakhrin and Sandhiya Sundash.

Actress Harshika Shrestha had also debuted in the Nepali film industry in this movie. She was expected to go a long way in Nepali films but, she left the film industry after marrying an Indian businessman in 2015.

Poster of ‘Angalo Yo Mayako’ 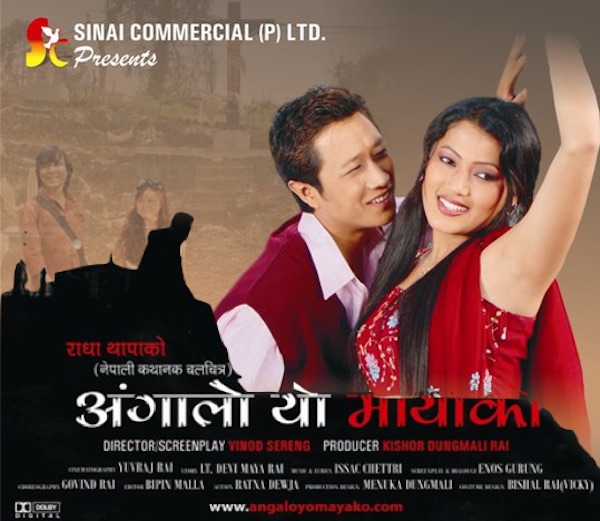