The movie released in 2014 (read the release news) wasn’t successful movie. The movie was released with Sambhu Pradhan’s comeback film ‘Ranga Baijani’. But, neither of the movies were liked by the viewers. The movie features Aryan Sigdel in an action role. With Aryan Sigdel and Surabina Karki, the movie also features Rem BK, Bodhraj Regmi, Sarika KC etc. I wrote about the start of the movie in Pokhara (read the news here) and also talked about Aryan being featured as a gangster (read the news). In addition to action it also features romance and music. Aryan is also featured as a lover-boy image in addition to being featured in a tough action role.

The movie made under Black Shadow Production is directed by Netra Gurung, a film director from Pokhara. Most of the movie was also shot in various locations in and around Pokhara. “Naike” is a Nepali word for a leader. Although it is a Nepali word, the name in various posters were spelled in different English letters. Some posters named the film as ‘Naike’ and others ‘Naaike’ (attached poster is a proof). The confusion in the name is a better indication how the editing of the film might have been done. No wonder, people didn’t like the film.

The full movie is now available:

Watch the full movie in 13 minutes in the following video. Enjoy the short version until the full film is available. 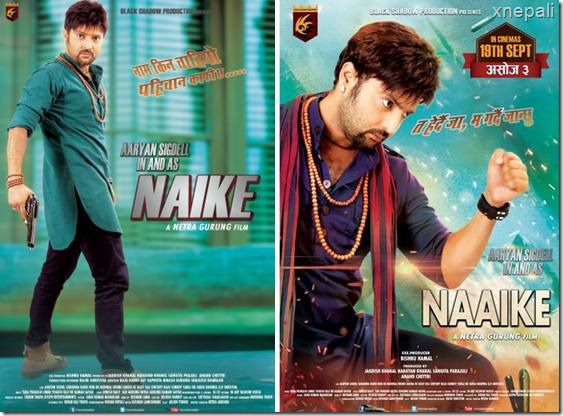 Please comment if you like the movie. I will update with the information based on your comments. Thank you and enjoy the film.