There is a lot of expectation from two new movies that relased in theater on July 28, 2017 – the sequel of ‘Prem Geet’ – ‘Prem Geet 2’ and a movie featuring Nikhil Upreti in negative role, ‘Rudra’. There is a huge fan-base for both the films. 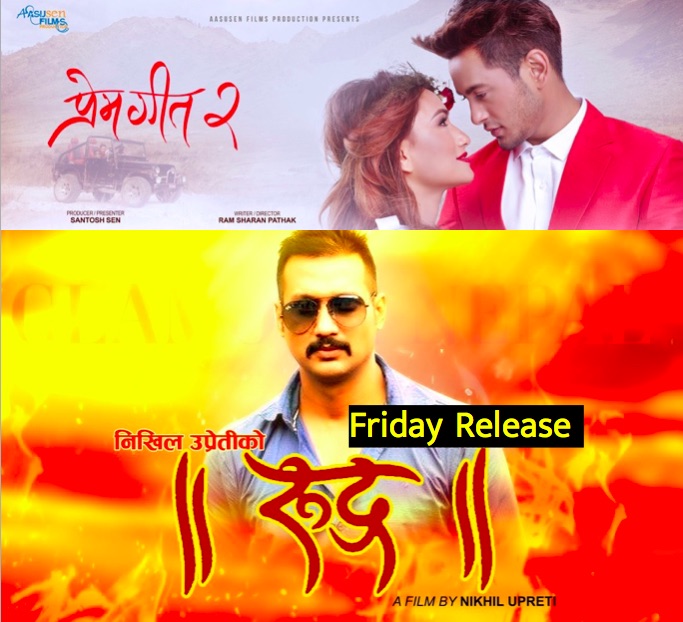 The movie by the writer and director Ramsharan Pathak features Pradeep Khadka, Ashlesha Thakuri, Kailash Katuwal, Shraddha Prasai, Shishir Bhandari, Kabita Regmi etc. in main roles. The sequel of super hit movie ‘Prem Geet’ features the lead actor of the movie. Another sequel, featuring the actress Pooja Sharma, ‘Ma Yesto Geet Gauchhu’ is also running in the third week. There is a hope that ‘Prem Geet 2’ will also be as successful as the previous movie.

The movie is a love story between a Nepali guy and a girl of Nepali origin, living in Myanmar. The friendship between the two grows into a love-relationship. The movie is about the struggle of the guy to get his love.

The movie features the beautiful locations in Nepal, Thailand and Myanmar. The producer Santosh Sen had spent a lot to shot the movie in international location. The cinematographer of the movie is Purushottam Pradhan, action by Asta Maharjhan and choreography by Renasha Rai.The songs of the movie had been quite popular among the viewers. The music directors are Kalyan Singh, Alish Karki and Rohit John Chhetri.

In the movie the action hero of Nepali film industry is featured in negative role for the first time of his acting career. The movie is a presentation of Nikhil himself. In addition to being the actor and the producer of the movie, Nikhil has also debuted as a music director in the movie.

The movie is an action movie in which Nikhil is featured as a person that came in between the love of a couple. The lead actors of the movie are Bishow and Sara, Nikhil is the villain of their love.

The movie features the cinematogrphy of Saurabh Lama, editing of Banish Shah and Milan Shrestha, action of HImal KC and Ramji Lamichhane is also the choreographer in addition to being the director of the movie.