There are no redlight areas in Nepal. But, it is open business in a lot of parts. Here are some of the locations in East Nepal where the business is running unchecked. This report is based on the information sent by Gopal Dahal. 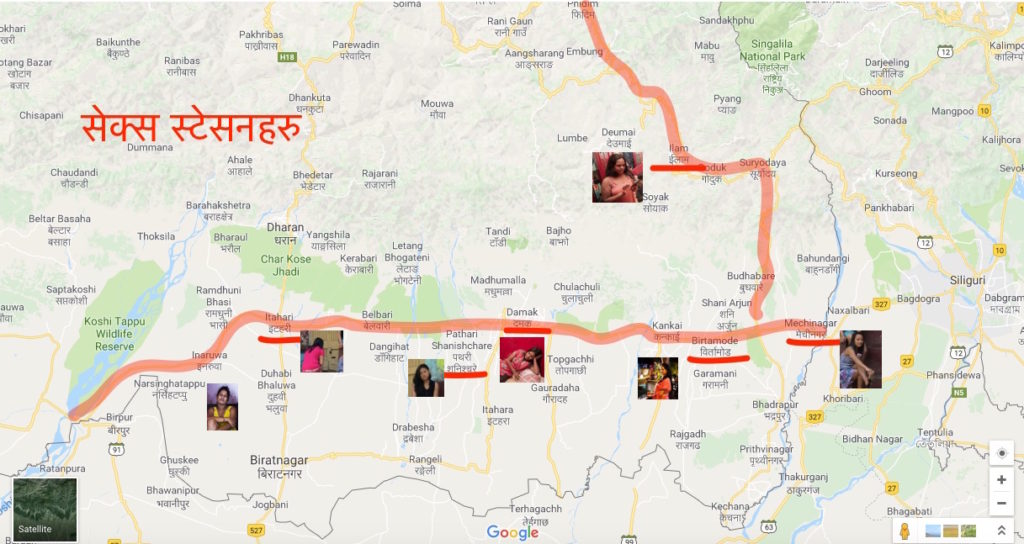 As you go from Kakarvitta in the East-West highway, you can see a lot of sex stations. The Birtamod bus park is one of the major station where most of the restaurant and hotels have girls in secret business.

After Birtamod, Damak is another main areas guys go in search of girls. Indian businessmen, tourists and travellers visit Damak for pleasure. The girls who have come from the villages in East Nepal are usually available for sex trade. The police also frequently arrest a lot of the girls and hotel owners in the area. Recently 17 people were arrested for illegal prostitution. According to police sources, the hotels and restaurants well known for such trade include: Priyanka Hotel, Ojha Hotel, Saugat and Dolphin Restaurant. Mamata Hotel of Damak-9 is also known for such trade.

It’s not only in the East-West highway, there are various stations in the way from Jhapa to Ilam, Paanchthar and Taplejung. The Charaali vehicle station near the army camp is notorious destination for sex workers. The clients in the hotels and resaurant at Charaali are the army, police, contractors and businessmen. After the location, a lot of lovers frequent the tea-estates in the area. Those in Fikkal of Ilam, most of the couples are pre-set for meeting at the location.

After Damak, Urlabari, is another major station along the East-West highway. The city has rapidly developed after urbanization by plotting the agriculture land in the area. Dance parties, and concert are also being held in the area frequently.

The hotel and restaurant for resting and having fun have been in increasing trend in the city. Similar to Urlabari, such stations are also available in Pathari Bazar. In the hotels and restaurants of Pathari, the Bhutani refugee girls were in such trade. But, these days, they have relocated to foreign countries. After they have left, the business has been slowed down in the area these days.

After Pathari, Itahari is the major station for such trade. The station is major in terms of the visitors and tourists. Most of the hotels, restaurants are in secret trade in the city. In the bus park area – in Biratagar line and Purba Paschim line almost all the restaurants in small huts are in such trade.

A while ago, a woman had complained to a Women’s advocate organization that Friendship Restaurant in Biratnagar Line had charged Rs. 1500 from the client but would only pay her Rs. 200. She had told that the police that visit to the restaurants had to be serviced for free. She had also told that they also took her photos without clothes. The women’s advocate group had punished the owner of the restaurant.

In addition to that, police frequently arrest a lot of people in such trade. According to DSP Bidhyanand Majhi of Itahari, they had arrested 160 people in connection with the illegal trade. He told, sex workers from all over Nepal visit the place for their trade. Most of the clients of the girls are Indian businessmen.

In the huts in front of Gorkha Department store, from the vehicle stand to the Nepal Army base camp, most of the restaurants’ main business is to offer services to men. The army, bus driver, truck drivers, rickshaw drivers are the clients of the girls in the area. The sekuwa bazar after that area also has some business in that trade.

I will write about the stations in the North (Dharan and area) and West (Rajbiraj etc.) of Itahari. Stay tuned.