In the first interview after the death of her husband of a month, Shree Krishna Shrestha, actress Sweta Khadka has spoken to BBC Nepali radio’s new section, ‘Anautho Byatha’. In the interview, Sweta talked about her condition, her faith and her definition of life. She also assured that she is trying to overcome the grief and start working again. 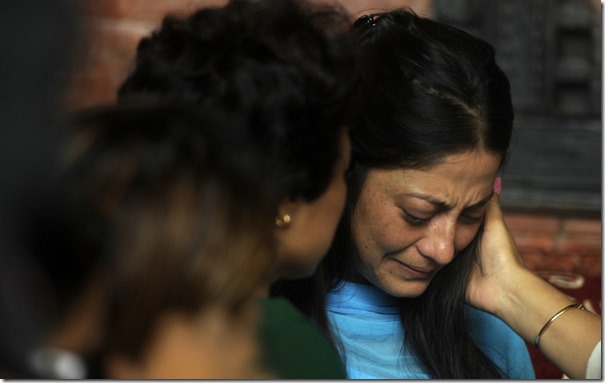 In the interview, Sweta cried a lot and told that she developed back pain and is being treated now.

A summary of the interview:

The first question asking how she is Sweta replied that she is not feeling well. She is resting because of back pain. Talking about the background of the back pain, Sweta told that she hadn’t realized that she remained in bed for 4/5 months. Because of such a long time in bed, she developed back pain. She told that it had been two months since she has been in an excessive amount of pain.

Sweta says, she never found him healthy after marriage. After marriage they only stayed at home for the next two days. After that Shree Krishna had be be admitted to the hospital.

Sweta found a good friend and a good business partner in the film industry. Now she has lost the friend, she doesn’t know what to do in the future. She has been trying hard to get out of grief and continue working on the things she like. Her future plan is to help the poor and unhappy people.

For about four months after Shree Krishna’s death, Sweta wasn’t able to help herself. She had to be taken care of. It has been two months now that she is trying to take care of herself and trying to get out of the grief. She is taking her medicine.

Before the death of Shree Krishna, Sweta believed in God and used to pray a lot. She used to fast and go to temple everyday for Shree Krishna’s life. But, no God heard her prayer. Now, she is not sure the God is there to help people.

When asked what life is, Sweta said that she used think that life was like a flower. But, now she thinks life is living. Time is the biggest force in life. She regrets that she didn’t marry in time.

You can listen the full interview in BBC Nepali website.

Video Sweta Khadaka after the death of Shree Krishna;

A recent public speech of Sweta in Malaysia.