The film produced and acted by Rekha Thapa, Hifajat, got into trouble when Vishow Hindu Mahasangh asked the authorities to stop its screening.

Many bloggers â€˜cried foul’ on the intension of the protest as the dress worn by the actress in the movie doesn’t seem to harm the religion in any way.

When the producers and artists of the movie wrote letter explaining that the design of the dress was not intended to degrade the Hindu belief and it was purely used for commercial and entertainment purpose. The heads of the organization reviewed the movies and have decided to let the movie screen.

In a letter written to the producers, Mahamayaprasad Singh of the Hindu organization, told the producers not to repeat such mistakes again and told them to use the medium to promote the religion. 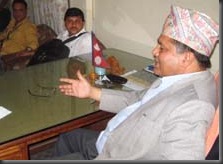 Hindu organization in Nepal, Vishow Hindu Mahasangh, has asked the Chief District Officer of Kathmandu to stop screening of Rekha Thapa‘s movie â€˜Hifajat’ (Letter attached below). In response, the CDO of Kathmandu, Laxmi Prasad Dhakal, has stopped the screening of the movie.

The film maker and other film professionals however have protested the CDO’s action.
They argued that the movie was being screened after receiving the government permission and after being passed by the censor board. By the order of the CDO, the police has removed the posters of the movie and stopped the screening at Puspanjali and Asthanarayan Cinema Halls in Kathmandu.

Our friends at MoviesNepal have rightly said that religion shouldn’t be brought in such a minor issue:

Rekha Thapa has worn a yellow dress with â€˜Hare-Ram Hare-Krishna’ scripts in the song â€˜Naran Naran â€¦’ and a fight scene. The scenes of dance(03:05) and the fight scenes (00:30) can be seen in the following trailer.
END_OF_DOCUMENT_TOKEN_TO_BE_REPLACED