The shooting of an upcoming movie ‘Parcal’ has completed and the film makers have promised to release it in three months. The announcement was made in a press meet organized in Dharan to inform about the movie. After 41 days of shooting the movie was completed recently and it is currently in post-production phase.

The movie is made on the story of parcels sent from foreign countries by Lahure (Nepali working in foreign army or police force). The movie was shot in Kathmandu airport and in different parts of East Nepal like Pathivara, Chatara, Ilam, Dharan and Mahendranagar. The movie directed by a debut director of Dharan, Rabin Shrestha, features a police inspector in Singapore, Prabhu Shrestha and Srijana Fago Limbu in leading roles. Other actors include Bikram Singh, Sonu Jayanti, Presika Niraula, Pooja Tamang and Kishor Sambahanfe.

END_OF_DOCUMENT_TOKEN_TO_BE_REPLACED

Actor Sabin Shrestha has asked his ex-girlfriend Namrata Jha to stop talking about him and taking credit of his success. In his Facebook post, Sabin has told that it has already been two years since he and his girlfriend of 8-years have broken up. In the last two years, he had never called her and says that he is happy that way. We wrote about the break-up of Sabin and Namrata in 2013.

Read the full message Sabin has posted in his Facebook wall (it is in Nepali):

From the message it is clear that Namrata has tried to take credit of Sabin’s success when she talked with others. Sabin has also asked Namrata not to interfere in his personal life.

END_OF_DOCUMENT_TOKEN_TO_BE_REPLACED

The role of actor Nikhil Upreti in the movie on floor, ‘Lootera’ is that of a don. The getup seen in the shooting photos is different from his roles in other movies. Nikhil has made sure that the style and getup of ‘Lootera’ doesn’t match to that of his upcoming release ‘Bhairav’. 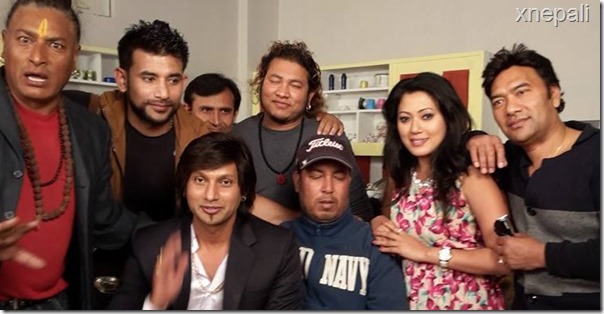 ‘Lootera’ is being jointly produced by Basanta Kumar Shrestha and Gopal kayastha. With Nikhil artists Nisha Adhikari, Harshika Shrestha and Sabin Shrestha are also featured in leading roles in the movie. After the completion of the shooting of the movie in Kathamndu in a few days, the film crew is moving to Birgunj for the remaining shooting.