The rely-hunger strike of film artists has ended on the 12th day of it’s start. In the mean time, the government has ignored the protesting artists and has unilaterally appointed the chief of Film Development Board. Today, at 11:00 AM a press meet was organized to start a hunger strike toll death to create more pressure to the government. 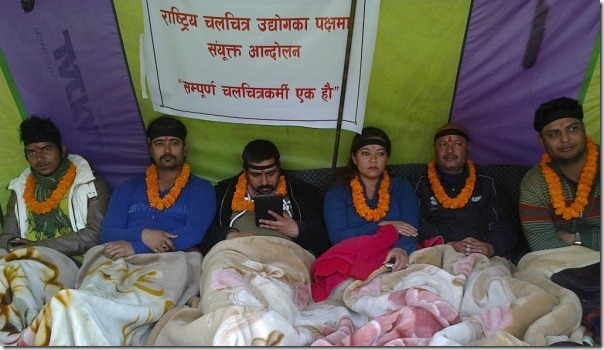 In the press meet, the protesting artists have asked all the Nepali movie professionals to halt movie production and also asked the film theaters to stop screening movies. But, the theater owners have ignored the request and are running the regular shows.

The protest of film artists started on Poush 2 (December 17, 2012) when Bimal Poudel started hunger strike demanding the government to comply with their 9-point demand. Agraj KC and Mausami Malla joined Bimal on Poush 3  in the hunger-strike till death campaign. On Poush 5 (December 20, 2012) the hunger strike was ended when the communication minister Raj Kishor Yadav agreed to comply with the demands of the artists. But, even after 3 weeks of agreement, the government didn’t even attempted to fulfill the demands of the artists.

To protest the inaction of the government  the film artists locked FDB on January 9. When the government arrested more than 30 artists on January 17, the protest took the form of rely-hunger-strike. From January 27, shooting and post productions of movies are also halted in protest and the hunger strike-till-death starts on January 29.

One thought on “Film Artists start an indefinite hunger strike”