After a long time, Tulsi Ghimire’s another movie has released in theatre in Nepal, titled ‘Darpan Chhaya 2’. One of the most successful directors of the Nepali film industry, Tulsi Ghimire’s last few movies weren’t as successful as his reputation. The movie named after his previous superhit movie ‘Darpan Chhaya’ – the new movie will determine in Tulsi is still relevant in the new-age Nepali movie industry. 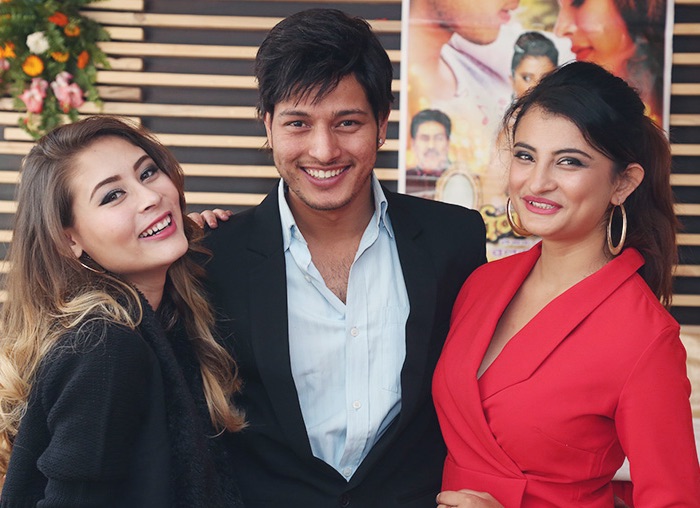 The movie introduces three new actors in the leading role – Puspal Khadka, Sahara Karki and Shraddha Prasai. I had previously written a detailed post about the three new entries in the movie- Read Who are the new entries in ‘Darpan Chhaya 2’.

The movie ‘Darpan Chhaya 2’ is written by Tulsi Ghimire. The music of the songs in the movie are composed by Ranjit Gajamer and Chandan Lomjel. With Puspal Khadka, Sahara Karki and Shraddha Prasai the movie also features actors like BS Rana and Saroj Khanal. The movie is made in a triangular love story between two girls and a guy. It is a teenager love story. The cinematographer of the movie is Rameshowr Karki, editing by Prakash Baraili and Bharati Ghimire. The movie is produced jointly by Sabu Gadal and Rabi Karki.

Actually Puspal Khadka had previously acted in ‘Ajhai Pani’ as Puspa Khadka in supporting role. Now, he has re-named himself as Puspal and is featured in leading role. Puspal is a well known model in various music videos.

Is Darpan Chhaya 2 a sequel or not ?

About one and a half decade ago, ‘Darpan Chhaya’ had broken the record in earning and was one of the most successful movie of the time. Now, the sequel is released as ‘Darpan Chhaya 2’. But, according to the director Tulsi Ghimire, the story has no connection between the two movies. It is a completely different story with different characters.

In fact, Tulsi Ghimire had given it a different name ‘Dhun’ in the start. But, when he found out that the name was already taken and was not available, he just named it ‘Darpan Chhaya 2’. That means, the movie is not a sequel movie at all.

Are sequels cheating the viewers?

When the movie names sound like sequels and the content is unrelated, viewers might get irritated. I have received a lot of comments in the video about another sequel movie, ‘Prem Geet 2’. Two sequels of hit movie ‘Prem Geet’ are being made at the same time. But, the problem is – the original movie wasn’t made by having a sequel in mind. In the original movie, both the lead character are shown to have died. Now, the viewers are wondering how could the sequel be made if they have died in the first part.

And, there is another problem with ‘Prem Geet’ sequel. The actor is in one sequel and the actress is in another sequel. They are competing with each other – creating a great confusion among the viewers.

Watch some sequelÂ moviesÂ and compare: