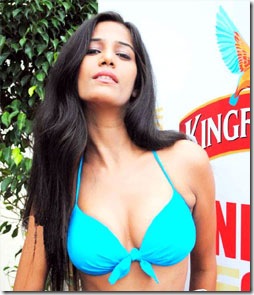 Amidst various forms of protests and threats, an Indian daily, Times of India, quote Poonam telling "Threats don’t bother me." A case is filed against her in a Bhopal court might means arrest if she keep her promise. Women’s wing of Indian political party, BJP, has also written to the police commissioner Mumbai requesting to take action against Poonam.

In a letter Poonam wrote to BCCI on Friday, she told:

I write to you as a great fan of cricket and above all a patriotic Indian. I want India to win the Cricket World Cup 2011, and I am willing to go the extra mileage. â€¦ Going nude in private with consenting adults for a therapeutic purposeâ€¦

I am serious about it as many studies conducted by various universities abroad confirm such performances boost and inspire people to perform better in any field, be it sports or otherwise.

Poonam also suggested BCCI to choose another country for such a show to avoid controversy in India.