In the beauty contest, Miss Universe 2012, held in USA, Olivia Culpo from USA has won the title this year. In the event held on December 19, 2012 at the Planet Hollywood casino on the Las Vegas Strip, 88 beauties from all over the world participated to win the title. 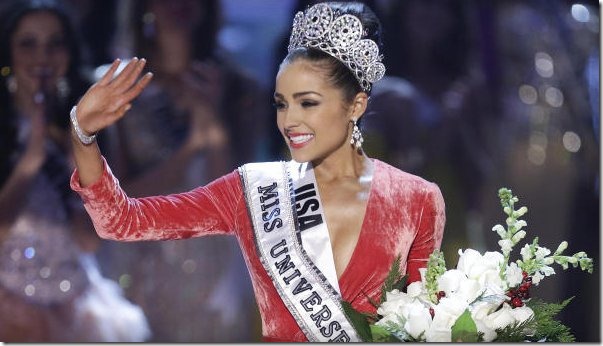 The runner-up of the title was Miss Philippines, Janine Tugonon and the second runner-up was Miss Venezuela, Irene Sofia Esser Quintero. Other two beauties in top five were Miss Brazil and Miss Australia.

The 20-year-old Olivia Culpo has become the first Miss USA to
win the title in more than a decade. Before she won, Olivia was asked a question whether she had she had ever done something she regretted. Here is the winning answer:

I’d like to start off by saying that every experience no matter what it is, good or bad, you’ll learn from it. That’s just life. But something I’ve done I’ve regretted is probably picking on my siblings growing up, because you appreciate them so much more as you grow older.

Olivia Culpo beat out 88 other beauty queens from six continents at the Planet Hollywood casino on the Las Vegas Strip to take the title from outgoing champion Leila Lopes of Angola.